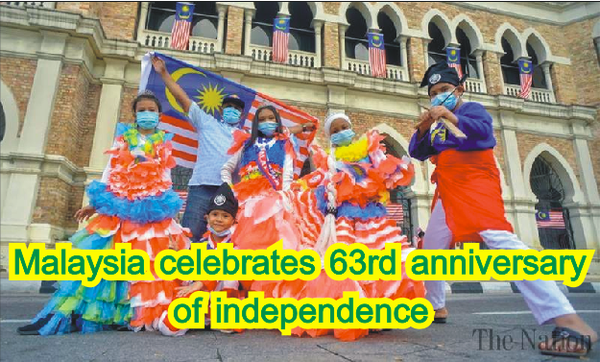 Malaysia marked the 63rd anniversary of its independence on Monday, with a scaled back celebration due to the restrictive measures to contain the COVID-19 outbreak. Malaysia's king Sultan Abdullah Sultan Ahmad Shah officiated the celebration at the administration center of Putrajaya, being joined by Prime Minister Muhyiddin Yassin and members of his cabinet. In his royal address, Sultan Abdullah urged Malaysians to appreciate and to practise the Rukun Negara, Malaysia's declaration of national philosophy, which should guide all citizens of the multiracial country.

He also called on the people to appreciate and safeguard the country's independence and peace. No assemblies and parades by uniformed bodies, government agencies and private sector were held due to COVID-19 restrictions. Instead, small official celebrating events were held in several venues in Putrajaya and the capital city of Kuala Lumpur, which were broadcasted live to the Malaysians.

In his address to the nation on Sunday, Prime Minister Muhyiddin Yassin called for his compatriots to care for each other in the face of challenges including those caused by the COVID-19 outbreak, ahead of the country's national day to celebrate the 63rd anniversary of independence. In the televised address, Muhyiddin urged Malaysians to care for the country, work towards maintaining the peace and harmony Malaysia presently enjoys and push the country forward to be more successful in various fields. On Aug. 31, 1957, the then Federation of Malaya gained independence from British rule.