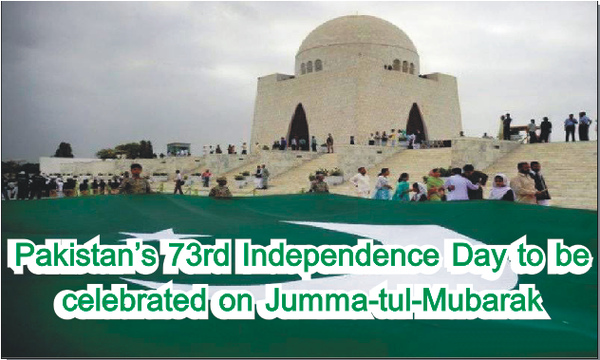 Pakistan’s 73rd Independence Day will be celebrated on Jumma-tul-Mubarak August 14 with traditional excitement and national spirit’ Events will be held in connection with the celebration of independence in smaller and bigger cities of the country . 31 guns salute will be presented in the Federal Capital Islamabad and 21 guns salute in the Provincial Capital Lahore. The  day will start by reciting Quran in the mosques for the martyrs of independence movement, whereas special prayers will be offered  for the security of the country and nation. and for the soldiers of Pak Army deployed at the border to safeguard the country.

The prestigious event of changing guards will be held at Mazar-e-Quaid and Allama Iqbal Tomb, National Flag will be waved on government, private buildings, houses and solidarity will be expressed with the Kashmiri Muslims of Occupied Kashmir. Whereas the markets and streets will be decorated with colorful buntings, in the night buildings will be decorated with colorful lights and events of flag hoisting will be held. The biggest event in connection with the celebration of Independence Day will be  held at the garden of the Municipal Committee in Jahania, where flag hoisting and Punjab Police march will be held .