India ranked as one of world's worst countries for expats 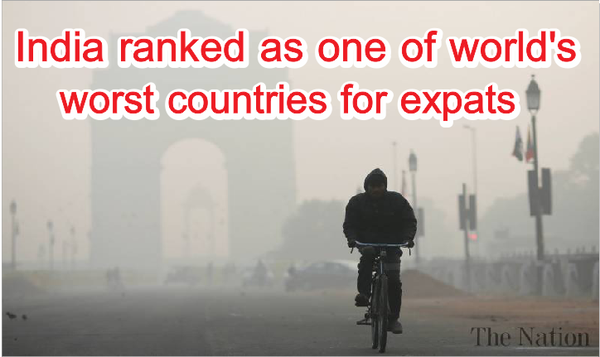 India is the fifth-worst country in the world for expats, according to a new report released by Inter Nations, a leading network for guidance to expats based around the world.  In the Expat Insider Survey 2019, India is ranked fifth from bottom in terms of safety and security among 64 countries across the world.

The survey found that over four in ten respondents reported negative feelings about the peacefulness in India and 27% were displeased with their personal safety in the Hindu-majority country — three times the global average of 9%. “A US American expat, for example, does not like “always having to keep my guard up — as a female, I don’t feel safe. As a resident, I often feel taken advantage of at work and outside work,” the survey said.

The same survey leaves India with the worst score in the environment category, making it the world's most environmentally unpleasant destination to be a working professional. Many of India's cities, industrial or otherwise, top air pollution charts. The surveyed respondents have also expressed their concern about the political stability in India, where a Hindu nationalist government has caused polarization with divisive policies like denying citizenship to millions of Bengali Muslim immigrants in the state of Assam. A spate of racist attacks against African expats based in India has also led to concerns that India may only be welcoming to Caucasian or European-seeming visitors.

“Almost double the global average (32% vs 17% worldwide) rate the political stability of India negatively. An Australian expat shares that ‘politics has become hardline, and there are social tensions’,” the survey found.

Kuwait was ranked the first from the bottom, making it the world's worst country for expats. Neighboring Bahrain was, however, included among the top ten, and has traditionally been one of the best and most multi-racial destinations for expats in the world, according to the survey. Taiwan was ranked number one, while Vietnam, Malaysia, Spain, Portugal, and Singapore were also all in the top 10. Even worse than India on the ranking were Turkey, Brazil, Nigeria, and Italy. Unstable political environments, a language-bar that limits socialising, and unstable economic conditions all put these countries in the bottom five.