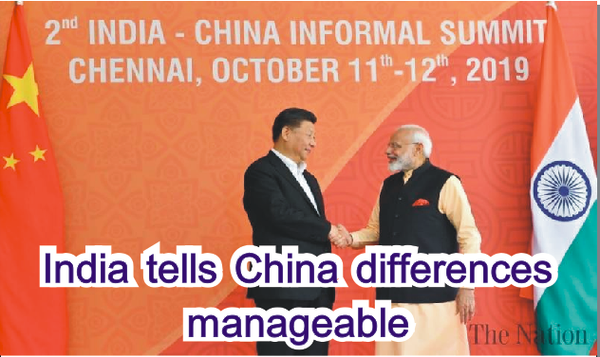 MAMALLAPURAM  - Indian Prime Minister Narendra Modi told visiting Chinese President Xi Jinping on Saturday that relations between their countries have attained stability and momentum in the past year, and that it should enable them to manage their differences and avoid disputes. The two leaders avoided the vexed Kashmir dispute from clouding their summit in the seaside temple town of Mamallapuram.  Modi said both countries agreed to be sensitive to each other’s concerns as they held delegation-level talks.

Modi and Xi were meeting at a time of tensions over Beijing’s support for Pakistan, India’s archrival, in opposing New Delhi’s downgrading of Kashmir’s semi-autonomy and continuing restrictions in the disputed region. Indian Foreign Secretary Vijay Gokhale told reporters that “this issue was not raised and discussed,” but that Xi apprised Modi of Pakistani Prime Minister Imran Khan’s visit to Beijing earlier in the week. “India-China relations are not predicated to a single issue,” Gokhale said, adding that the latest developments in Kashmir were an internal matter of India. Without going into details, Xi said in his opening remarks at the delegation-level talks that he had taken part in candid and in-depth discussions with Modi on various issues since his arrival Friday.

Gokhale said the two countries decided to set up a group at the finance ministers’ level to discuss trade and investment issues, especially India facing a whopping $63 billion trade deficit with China.  According to India’s Commerce Ministry, India’s exports to China amounted to $13.33 billion in the 2018 financial year, compared with imports of $76.38 billion. Xi and Modi met over dinner for more than two hours on Friday after the Indian prime minister took the Chinese president around an ancient temple and some other monuments that are part of UNESCO’s world heritage sites in Mamallapuram.

Besides emphasising the expansion of trade and investment, Modi and Xi resolved to work together in facing the challenges of radicalization and terrorism, Gokhale said. There was an acknowledgement that both India and China were “very complex and very diverse countries,” and that both will work together so that radicalization and terrorism does not affect their multicultural, multiethnic and multireligious societies, Gokhale said. He did not give details. Tensions in Kashmir, which is divided between Pakistan and India but claimed by both in its entirety, have escalated since August, when India downgraded the semi-autonomy of Indian-administered Kashmir and imposed a security and communications lockdown.

China supported Pakistan in raising India’s actions at the U.N. General Assembly meeting in New York. China said India should not act unilaterally in Kashmir, a portion of which China also controls. Xi arrived in India two days after hosting Pakistani Prime Minister Khan in Beijing. India accuses neighbouring Pakistan of arming and training insurgent groups fighting for Kashmir’s independence or its merger with Pakistan. Pakistan denies the charge. The two countries have fought two wars over the region’s control since they won independence from British colonialists in 1947. A meeting between Xi and Modi in Wuhan, China, in April 2018 was preceded by tensions caused by a 10-week standoff between their countries’ armed forces on the Bhutan border.

China claims some 90,000 square kilometers (35,000 square miles) of territory in India’s northeast, while India says China occupies 38,000 square kilometers (15,000 square miles) of its territory on the Aksai Chin Plateau in the western Himalayas. Officials have met at least 20 times to discuss the competing border claims without making significant progress. India and China fought a border war in 1962. India also is concerned about China’s moves to build strategic and economic ties with its neighbors Sri Lanka, Nepal, Bangladesh and the Maldives. Xi will visit Nepal on Saturday.