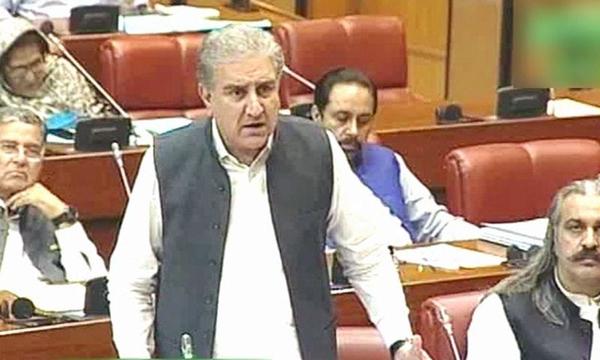 Foreign Minister Shah Mahmood Qureshi on Thursday said that unlike Pakistan, Indian political parties are not on the same page over the revocation of occupied Kashmir's special status.

India's government, led by the Hindu-nationalist Bharatiya Janata Party, decided on August 5 to repeal Article 370 of the Indian constitution, which had granted occupied Kashmir special status. The government had subsequently instituted a security lockdown and communications blackout to suppress the Kashmiri reaction to its unilateral decision. The clampdown is now on its 25th day.

The foreign minister while addressing the Senate today said that 10 opposition parties of India wanted to visit Srinagar on the invitation of occupied Kashmir's governor but were not allowed to visit the restive region.

He said that the restriction exposed the Indian government and validated the viewpoint that something is happening in occupied Kashmir which has to be concealed.

"The [Indian] supreme court, after long and careful consideration, has issued a notice [to the government]. Let's see what the court will do in October. I think it's a big challenge for the court," he said, adding that the pressure of the brute majority, the ideology of Rashtriya Swayamsevak Sangh (RSS) and Hindutva is clearly visible.

He added that the entire nation's support is required to come out of the situation in a decent way.

"There is no need to become hopeless. Nations are tested and suffer hardships. It might be possible that our enemy has tried to attack us keeping in view our financial conditions and the challenge of the FATF, and yes they enjoy supremacy in numbers — but our history tells us that only 313 individuals can defeat the enemy's strike with the help of their conviction.

"When you proceed with the power of faith, you can engage the enemy with bare hands and hungry stomachs. This is the history of Islam and we need to take a lesson from it," he added.

The minister added that the country was weighing its diplomatic, legal and political options. He said that on the diplomatic front, Pakistan has achieved a few successes. He added that the United Nations took up the matter, negating the Indian propaganda that occupied Kashmir was an internal issue.

"After 54 years, our case was taken up at the UN and now the issue has been internationalised."

On the political front, he said that Islamabad did a great job on Aug 14 and 15. He added that Pakistani diaspora in the United Kingdom, Europe and the United States was also doing a commendable job raising the issue. He noted that protest demonstrations against the Modi government's move were being organised across the world.

He said that the government is also weighing its legal options and international lawyers have already been engaged in this regard.

The country observed a 'Black Day' on Aug 15 to coincide with India's independence day celebrations, in solidarity with the people of occupied Kashmir.

Prime Minister Imran, meanwhile, has pledged to take up the responsibility of raising voice of the Kashmiri people at every forum of the world. “I will be the ambassador of your cause across the globe,” he said earlier this month.