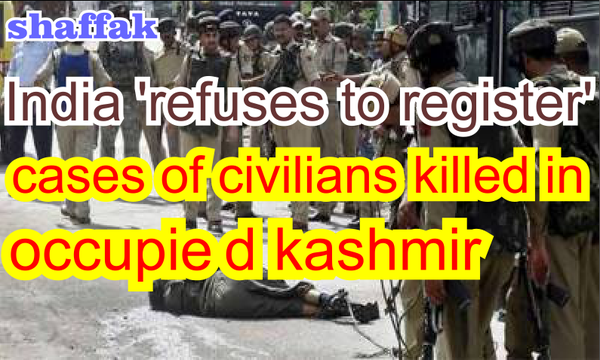 kashmir (monitoring report) Families in occupied Kashmir say several civilians have died amid clashes between security forces and protesters since India announced its decision to withdraw the region’s autonomy and imposed a sweeping military curfew that has seen thousands detained and residents cut off from all communication and the internet.

UK publication The Independent, in a report titled Ghosts of Kashmir: Indian authorities refusing to issue death certificates for civilians killed in clashes, say families, spoke to families who said there have been multiple deaths since India's move on August 5 — contrary to statements by Indian officials. The report quoted police chief Dilbagh Singh as saying “there has been not a single casualty as a result of clampdown”, and Indian government spokesperson Rohit Kansal saying he had “no reports” of civilian deaths.

The occupied territory has been under a strict lockdown to prevent protests over the repealing of Article 370 of the Indian constitution, that granted occupied Kashmir special status. Despite the lockdown and communications blackout — that has entered its fourth week now — there have been reports of large protests.

Speaking to The Independent in Srinagar, a doctor revealed that hospital staff have "received clear verbal instructions" from the Indian authorities "to keep admissions related to the clashes to a minimum, and to discharge victims quickly, in order to keep statistics down". The report looks into three deaths, in which relatives detailed the difficulties of trying to get doctors to formally acknowledge the role played by the clashes or even to issue them with death certificates at all.

Among the casualties was 55-year-old Ayoub Khan, who was the only breadwinner in a family with three daughters, according to the report. Khan died on August 17 after clashes between forces and protesters broke out in Yaripora, in the Srinagar district.

“Both of us were standing together, as the forces launched teargas canisters. A couple of them exploded between Ayoub’s legs and he started suffocating. Immediately he was taken to Shri Maharaja Hari Hospital (SMHS),” The Independent quoted Ayoub’s friend, 60-year-old Fayaz Ahmad Khan, as saying.

“When we reached the hospital, doctors told us he was already dead,” said Ayoub’s brother Shabir. “We asked them to mention on the record that he died due to teargas, but they refused.”

According to the report, police, fearing a public outcry at Ayoub’s death, ordered the family not to conduct the usual funeral procession and limit the number of attendants to no more than 10. Shabir and other family members received injuries when they brought the body home in an ambulance and security forces personnel broke up a crowd gathering at the home by opening fire with shotgun pellets.

The report says that the family after a few days asked the hospital for the death certificate, "at which point doctors told them they must beforehand get a crime First Information Report (FIR) from the police, something the family say would be impossible to get in the current climate". “It is clear that in any case against the police, they won’t mention the real cause of death,” Shabir told The Independent. “It’s injustice, we aren’t able to register the casualties. We are helpless.” Police officials in Srinagar said they were unable to “give exact data of any such casualties” but that they were looking into the cases being raised by The Independent.