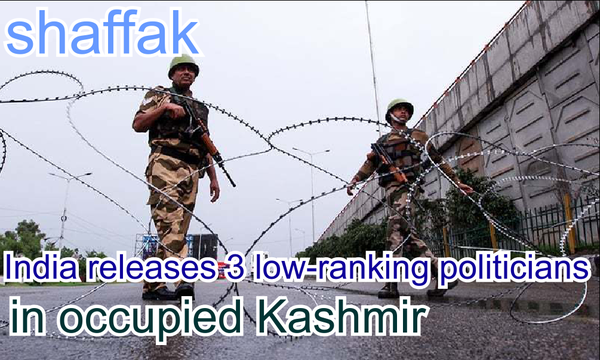 Indian authorities on Thursday released three low-level politicians in occupied Kashmir amid international pressure to ease a clampdown imposed more than two months ago when New Delhi downgraded the autonomy of the region and imposed tighter controls.

The Indian government decision came days after it announced it would allow tourists back into the region after ordering them to leave in August because of security concerns. However, mobile internet and cellphones remained cut, with telecommunication restricted to landline phones.

Prominent Kashmiri politicians, including some who have historically accepted India's control over the disputed Muslim-majority region, remain detained in their own homes or in jails.

Kashmir's pristine mountainous landscape, ski resorts, lake houseboats and apple orchards have long made it a tourist attraction. But India's harsh crackdown and moves to reduce the territory's semi-autonomy have touched off widespread anger, and Kashmiris have launched a campaign of refusal to resume their normal lives.

As some Indian tourists trickled back on Thursday, Wali Mohammad, leader of an association of houseboat owners, complained that the government first forced tourists to leave the region and now is allowing them back without any facilities.

“There is no internet, phones don't work, and there isn't any transport available. What will the tourists do when they come here?” Mohammad asked.

Anita Rai, a tourist from the eastern Indian state of Bihar, said she was not scared but was troubled by the lack of internet and mobile phone connectivity.

“My parents must be a little worried as I can't contact them. There is no way for us to tell them that we are safe here and having a great time. There are security forces everywhere and therefore we have no fear at all,” she said.

Atul Kumar, another tourist, complained that most shops were closed.

“It would have been nicer if the shops were open. We are experiencing a bit of loneliness,” he said.

An armed rebellion has raged in Indian-occupied Kashmir since 1989 seeking a united Kashmir either under Pakistani rule or independent of both countries.