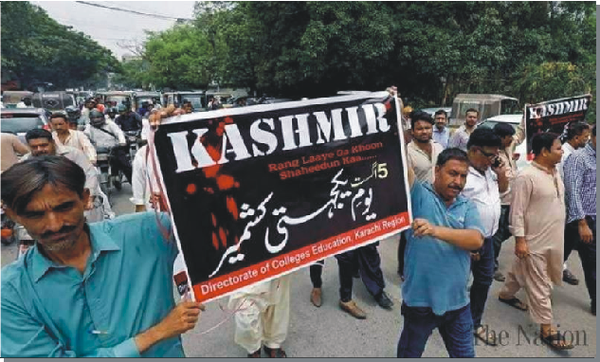 In Indian illegally occupied Jammu and Kashmir, people are observing complete shutdown on India's Independence Day, today, to give message to India and the world that they reject India's illegal occupation of their homeland. Call for strike has been given by the veteran Hurriyat leader, Syed Ali Gilani, the All Parties Hurriyat Conference, the Mirwaiz Umar Farooq-led Hurriyat forum and supported by almost all Hurriyat leaders and organisations.

Meanwhile, the occupation authorities continue to impose strict restrictions across the territory to prevent people from holding anti-India demonstrations, today. The authorities have converted the Kashmir Valley, particularly Srinagar, into a military garrison by deploying Indian troops and police personnel in every nook and corner.

In Srinagar, thousands of troops and policemen are patrolling the deserted streets, lanes and by lanes to thwart any attempt of people to stage anti-India demonstrations. A cricket stadium in Sonawar area of Srinagar, the venue of main function of Indian Independence Day, has virtually been turned into a fortress. No vehicular movement is being allowed near the stadium while sharp-shooters have been deployed on high-rise building around the venue.

Indian forces' personnel have erected mobile bunkers in Srinagar where people are being subjected to frisking and identification checks. The movement of people is also being constantly monitored through the close circuit cameras (CCTVs) installed at various places in the city. Sniffer dogs and bomb disposal squad have also been pressed into service. Aerial surveillance is also being maintained with the help of unmanned aerial vehicles (UAVs).

The so-called security has been beefed up in parts of the territory and along the Srinagar-Jammu highway. The authorities have snapped the low speed internet service in the occupied territory while high speed 4G internet already remains suspended since August 05, last year, when Narendra Modi-led fascist Indian government had revoked the special status of the IIOJK.