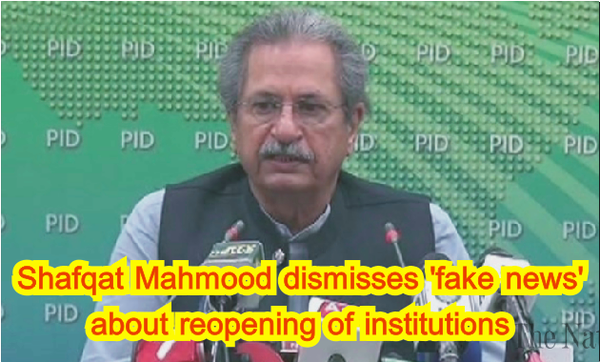 Federal Minister for Education Shafqat Mahmood on Friday rejected "false news" that schools were remaining closed till October due to the coronavirus pandemic. Mahmood tweeted that a meeting between all the education ministers will decide the likelihood of reopening schools and that too, in a phased manner. "Some fake accounts in my name are spreading false news that schools will remain closed till Oct. Not true. Education ministers meet on 7th to finally decide with likelihood of opening on Sept 15 in a phased manner," he tweeted.  In July, Mahmood had told a news conference that all educational institutions will reopen on September 15 if the coronavirus situation of the country improves.

He had also said that the government will review its decision in an inter-provincial meeting in the last week of August.The minister had said that provinces will be responsible for ensuring SOPs that are followed, cautioning schools to follow the procedures laid out by the government. In August, he chaired a conference of the education ministers of all four provinces in Islamabad where it was unanimously decided not to reopen schools before September 15.