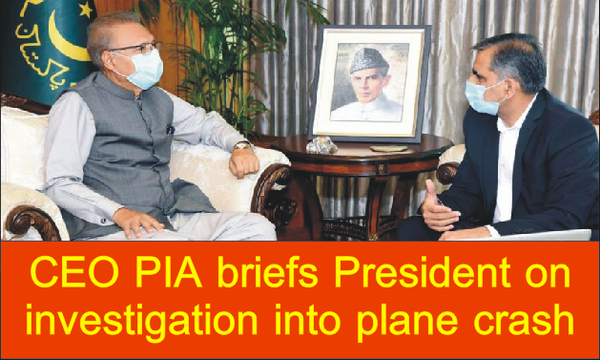 President Dr. Arif Alvi has directed Chief Executive Officer of Pakistan International Airlines, Air Marshal Arshad Malik to expedite the process of compensation to the families of plane crash victims. He issued these directives while presiding over a briefing at Aiwan-e-Sadr in Islamabad. The CEO PIA briefed the President about the investigation into the plane crash and the relief efforts made by the national airline. He said 44 bodies of the victims have been handed over to their heirs so far.

The President appreciated the relief measures taken by the PIA and the facilities provided by it to the families of the deceased. Meanwhile, Chief Executive Officer of PIA visited the house of PIA airhostess, Anam Khan in Lahore, who was martyred in the plane crash in Karachi. He expressed condolences with father and other family members of the deceased.