Jammu and Kashmir: What next? 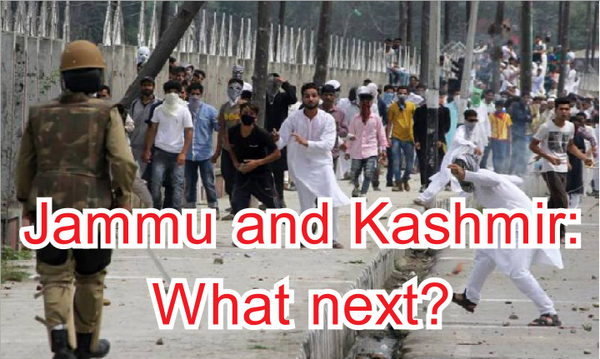 Much has been penned down on what happened in Indian LokSabha on August 052019. It’s implications on Kashmir and the region is yet to follow. Currently, the valley is under siege by Indian troops while the world is gradually raising its concerns for human rights violations and utter disregard of UN resolutions. Meanwhile, the uncertainty hovers over public minds over the question that what concrete steps Pakistan can take to meet the expectations of the people of Kashmir, except the emotional chants and war rhetoric. The reality is that the possible options seem very limited at the moment but are the only way forward for a gradual betterment. Few policy options can have some immediate effect but to expect the desired results in real-time shall serve no purpose.

First of all, it is the responsibility of the Pakistani state to lessen the rising war temperature in the country. In a country that has been at war for nearly two decades and lost hundreds of thousands of precious lives in its fight against terrorism, another war shouldn’t even an option to consider anymore. But the situation on the ground is quite different. Through traditional and social media, certain politicians and opinion-makers are constantly inculcating war rhetoric in the minds of the people. At this time, one should be critical of the views spreading such agenda and shun any viewpoints that undermine the implications of the war on the masses and the society. Also, a basic reassessment of its relations with India is the need of the hour. Pakistani state should avoid appeasing public opinion and moulding it towards realism and learn to live as two independent countries as there are imbalances of strategic and economic nature between the neighboring countries.

Secondly, the notion of Muslim Ummah that has been critically discussed now days should be considered empirically, keeping the sentiments aside. After the introduction of nation state theory, each state is responsible and in charge of its own affairs.Before bashing any country for not voicing concerns over Kashmir, one should remember their economic assistance to Pakistan at the hour of need. Just recently, some parts of Ummah helped Pakistan avoid an almost indispensable bankruptcy. Moreover, it’s time for Pakistan to realize that countries have their own interests and the battle for Kashmiri people is primarily Pakistan’s responsibility to undertake. I shall try to briefly outline key actions Pakistan can take in the backdrop of the current situation in the Kashmir valley.

The road to get the people of Kashmiri their right to self-determination or plebiscite is long and Pakistan has to take this tedious course, fighting on legal, diplomatic, human rights and related fronts. It has to remind world institutions such as the United Nations and its Security Council of their resolutions promising the people of Kashmir their right of self-determination. This can be done by sending diplomatic missions, inter-institutional and inclusive of all major political parties, on a sustained campaign to the world to highlight injustices and human rights violations done by the Indian Army. Also, Pakistan must ensure that Jammu Kashmir’s status as “disputed” in the UN’s statements of the resolution must not be altered.  Pakistan can write to international organization such as Amnesty International, Human Rights Commissions, and prestigious world media organizations to visit the under-siege areas of Jammu and Kashmir. This shall help acknowledgment and exposition of human rights violationsby the Indian occupation along with rising concerns about health and medical facilities available there. This might lead to the end of the curfew and opening of internet services in the valley.

Moreover, Pakistan must extend its full-spectrum support, acceptable to Kashmiri people, to the indigenous political struggle and civil society within the valley such asHurriyat Conference and other Kashmiri political leadership. Authorities in Pakistan should contact and ensure their utmost solidarity with the Kashmiri people’s fight to gain their right to self-determination. This should be one of many steps to provide comfort to Kashmiri people.

It’s imperative that this support must not include any kind of support to militant activities in the valley. Any such step shall not only malign the Kashmiri people’s peaceful struggle for rights but also affect Pakistan’s efforts vis-à-vis FATF actions on terrorism funding. In the end, one must be certain that war is not in any one’s interest. Both short term and long term dialogue-based approach are indispensable for both India and Pakistan to reach a peaceful solution of the Kashmir Dispute. The process must include the will and wishes of the Kashmiri people and the solution must be acceptable to the people of Jammu and Kashmir.