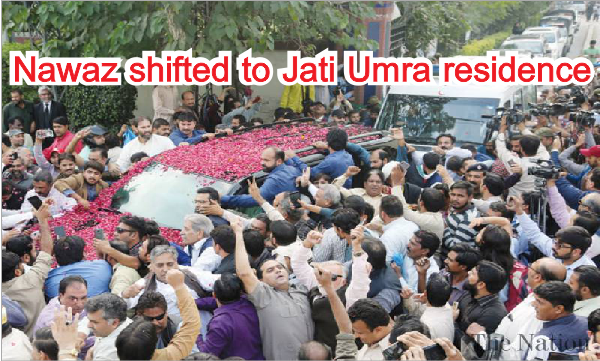 LAHORE - Former prime minister Nawaz Sharif was shifted from Services Hospital to his Jati Umra residence on Wednesday afternoon soon after issuance of Robkar (release orders) for Maryam Nawaz by an accountability court.The ex-PM was discharged from Services Hospital Tuesday on his request but later decided to stay for another night to wait for completion of legal requirement for release of Maryam Nawaz on bail.The court issued the Robkar to Kot Lakhpat Jail superintendent which after completion of legal formalities was sent to the Services Hospital that paved way for Maryam Nawaz to accompany her ailing father to the Jati Umra residence.Opposition Leader in the National Assembly Shehbaz Sharif and Capt (r) Muhammad Safdar accompanied the ex-PM and his daughter in their journey to the Jati Umra .

Prior to shifting of Nawaz Sharif, Head of Special Medical Board and Services Institute of Medical Sciences (SIMS) Principal Prof Mahmood Ayyaz briefed the Sharif Medical City’s doctors about medical history, diagnosis, medication and treatment. He handed over all the diagnostic reports including the latest one that showed further drop in the platelet count. Nawaz’s platelet count dropped to 28,000 as against 30,000 last day. Prof Mahmood Ayyaz said condition of the ex-PM was still critical that needed specialized care. He said the board would cease to exist on Nawaz Sharif’s leaving the Services Hospital. Prior to his leaving the hospital, Nawaz Sharif thanked all the doctors for providing treatment and taking care for 16 days.

Expecting shifting of PML-N supreme leader, huge number of party workers gathered outside the health facility for expressing solidarity and seeing a glimpse of leaders. They chanted slogans in favour of Nawaz Sharif and against the present regime. Nawaz, his daughter and other family members left the hospital in a convoy of vehicles that also included well-equipped ambulance. Party workers showered rose petals on the vehicle of Nawaz Sharif who was expected to be shifted to Sharif Medical City Hospital. Instead of going there, the ex-PM went to his residence where the doctors had set up Intensive Care Unit for proper care.

Giving reason of taking the ex-PM to his residence and not the SMC nearby, PML-N spokesperson Marriyum Aurangzeb said, “The step is aimed at saving Nawaz Sharif from hospital acquired infection.” She said there was danger of infection due to low platelet count of the ex-PM. She said ICU had been set up at the residence to save the ex-PM from further complications. ICU ventilator and cardiac facilities have also been provided. Personal physician of ex-PM, Dr Adnan Khan will supervise healthcare service delivery at the ICU. One doctor will be available at the ICU round the clock. Doctors have restricted meetings of Nawaz Sharif due to his critical health condition.During his over two week-long stay in Services Hospital, Nawaz Sharif also suffered a minor heart attack, while his platelet count, blood pressure, blood sugar and kidney functions also remained inconsistent.