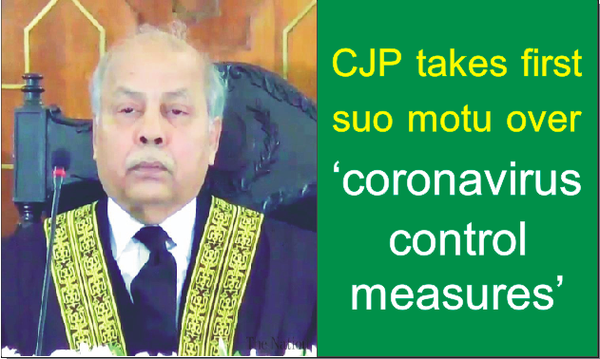 ISLAMABAD -  Chief Justice of Pakistan (CJP) Justice Gulzar Ahmed on Friday took his first suo motu notice of the government’s measures taken to curb the spread of coronavirus in the country. A five-member bench of the apex court headed by the Chief Justice and comprising Justice Umar Ata Bandial, Justice Mazhar Alam Khan Miankhel, Justice Sajjad Ali Shah and Justice Qazi Muhammad Amin Ahmed will conduct the hearing of the case on April 13. This is the first suo motu notice taken by Justice Gulzar Ahmed as the country’s top judge. In this connection, the apex court issued notices to the attorney general and additional attorney general of Pakistan as well as AGs of all four provinces and Gilgit-Baltistan (GB).

Secretaries of interior and health have also been served with notices along with the chief secretaries of all four provinces as well as GB. Earlier this week, Justice Gulzar had criticised the government’s decision to shut down health facilities for people suffering from ailments other than Covid-19 by closing outdoor patient departments (OPDs) in all hospitals across the country in view of the pandemic. The CJP made the observations during the hearing of a petition challenging the Islamabad High Court (IHC) order dated March 20 regarding release of 408 prisoners on the basis of coronavirus crisis.

The top judge also criticised the government’s response to the health crisis saying that “nothing was being done on the ground.” In this matter, the apex court had directed the federal government to establish quarantine centers at Taftan, Chaman and Torkham Borders with the each center has facility for accommodation of 1,000 persons. The apex court also said that there is need of legislation for the steps that the government to deal with emergency situation arising out coronavirus pandemic.

The top court of the country had noted that from these points–Taftan, Chaman and the Torkham borders – people enter into Pakistan. Initially most of the coronavirus cases came to Pakistan from these areas. It added, “Unless these entry points are plugged with effective quarantine center the surge of the coronvirus cannot possibly be stopped.” It maintained that the each quarantine centers should have accommodation for at least 1,000 persons with single occupancy, proper drainage, water supply, clean and hygiene toilets and the medical centers with doctors and the paramedic staff for treatment of sick people.

Justice Gulzar said that all these steps are required to be taken expeditiously and within one month time these centers need to made functional and directed the government to file report on it. The bench warned that if the directions are not complied then the Court may take action against the high officials. Regarding distribution of the money through Ehsaas programme, the court issued direction that the local governments be taken on boards and distribution of funds be made with taking all stakeholders on board and with their satisfaction. However, it later withdrew when the Attorney General requested that this aspect be decided after the top officials briefing to the bench members in the chambers.

The bench directed that Personal Protective Equipment (PPE) be manufacture in Pakistan as there is facility and resources available within the country because the imported PPE cost Rs7,200 per kit. However, if it is manufactured in Pakistan then it would cost Rs1500/- per kit. The attorney general told that the government would utilize all resources for manufacturing of ventilators locally so that every hospital and medical facility have sufficient number of ventilators.

The Court directed the federal, provincial and Gilgit-Baltistan governments to ensure providing PPE to the doctors and paramedic treating the coronavirus patients. The bench noted that the doctors and paramedics protest in Quetta as they were not provided PPEs to treat the coronavirus patients. The apex court had also directed the federal, provincial and GB governments to file comprehensive reports on all the orders issued by this court regarding the matter and had deferred the hearing in this matter till April 13.