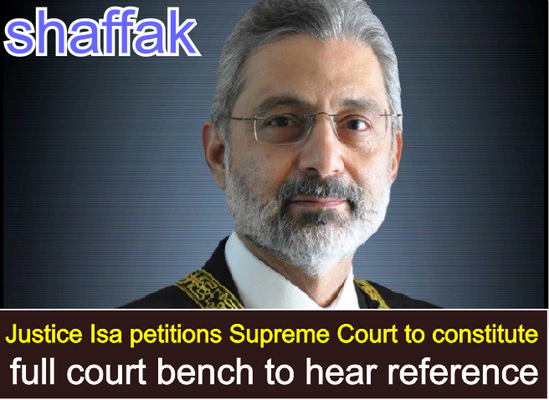 Justice Qazi Faez Isa — who is currently facing a misconduct reference filed by the president against him in the Supreme Judicial Council (SJC) — has in a new application requested the Supreme Court to constitute a full court bench to hear his petition against the SJC's proceedings.

In support of his argument, Justice Isa has contended that the SJC "expressed bias" against him in its verdict on Reference 427 (a second petition) and has therefore lost its credibility to give him a fair hearing.

Justice Isa contradicted by the CJP

The SJC had, last Monday, dismissed a misconduct reference against Justice Isa filed by a petitioner who had accused the justice of acting inappropriately by writing to the president and leaking those letters to the media.

The SJC in its decision had noted that though Justice Isa had admitted the writing of three letters to the president, there was nothing to show he had also leaked them to the media.

Further, "The purpose or the contents of such letters might appear to some to be oblique or objectionable, but such letters were merely private letters not shown to be meant or intended to be read by anybody other than the addressee and those to whom they had been copied," the verdict had read.

However, in the same verdict, Chief Justice of Pakistan Justice Asif Saeed Khosa had contradicted a key position taken by Justice Isa in the said letters regarding his ignorance of the petition filed against him.

Justice Khosa stated that he had personally provided Justice Isa an opportunity to read the reference before the latter wrote to the president.

While reading the allegations against him, Justice Isa had asked for a paper and pencil for taking notes, which were supplied to him by the chief justice personally, according to the judgement.

The decision had noted that, "The three letters written by [Justice Isa] to the president clearly stated that till the writing of those letters, the respondent judge did not know whether any reference had actually been filed by the president against him or not and in any case he was unaware of the contents of and the allegations levelled in any such reference, if filed.

Yet the aforementioned meeting of Justice Isa with Chief Justice Khosa "shows that the respondent judge not only knew about filing of the reference against him but also about the actual contents thereof and the allegations levelled therein before he had started writing successive letters to the president on the subject, professing his ignorance about the same", the verdict had noted.

Perhaps in reaction to this statement, Justice Isa in his new petition argues that the Supreme Judicial Council and its members be deemed no longer competent to hear the presidential reference against him

Justice Isa has also requested the court to direct the SJC to dismiss the reference in question on the basis of the complainant's failure to establish the allegation made against him, while striking down everything else (including the statement contradicting his stance) from the order.

He has also sought that the Supreme Court block the SJC's order from being published in any legal publication, and if it is, then his application against it should also be published.

Justice Isa also seeks that the court initiate or direct the appropriate action be taken against the complainant of Reference number 427, including the initiation of contempt of court proceedings against him.

Justice Isa argues that his application "raises very important constitutional questions" about the freedom of the judiciary, the formation of an independent viewpoint by the president of Pakistan, obtaining the Federal Cabinet's approval and matters of surveillance and the manner and method of collecting evidence against a judge of the Supreme Court, and should therefore be heard by the full court.

He has argued that a judicial precedent for constituting a bench comprising the full court is already available in Chief Justice Iftikhar Chaudhry versus the President of Pakistan.

The references against Justice Isa

A reference had been instituted in May this year against Justice Isa accusing the judge of concealing his properties in the United Kingdom, allegedly held in the name of his wife and children. The judge subsequently wrote three letters to President Arif Alvi, which were eventually leaked to the media, asking him to confirm whether the reports were true.

The judge had complained that selective leaks of the reference to the media amounted to his character assassination, thus jeopardising his right to due process and fair trial. He had also sought a copy of the reference.

Later, a lawyer from Lahore, Waheed Shahzad Butt, had filed a second reference before the SJC against Justice Isa for writing the said letters and leaking them to the media. In this second reference, filed under Article 209 of the Constitution, the judge was accused of violating the Code of Conduct for judges.