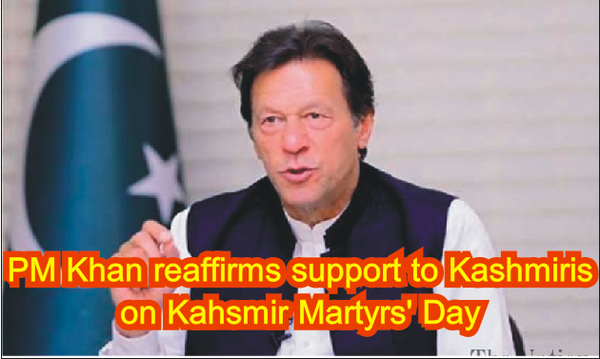 Prime Minister Imran Khan paid tribute to the people of Kashmir Monday for  laying down their lives "for freedom and today they continue to fight and defy a Hindutva supremacist regime" which is adamant on wiping out the Kashmiri people.

The prime minister in his message on Kashmir Martyrs' Day, while saluting the Kashmiris for their continued struggle against the illegal and barbaric Indian occupation of occupied Kashmir said, “The shuhada of 13 July 1931 were the forefathers of today's Kashmiri resistance,” PM Imran tweeted.

“Their descendants have, generation after generation, laid down their lives for freedom and today they continue to valiantly fight and defy a Hindutva Supremacist regime bent on demographic engineering to wipe out the Kashmiri people and their identity,” he added.

The prime minister added that Pakistan will continue to support the Kashmiris right to self-determination till it is liberated.

“Pakistan has always stood steadfast for the Kashmiri right to self-determination and will continue to support this just struggle till IOJK is liberated from the clutches of Indian illegal occupation. That day is not far,” the premier added.

The Kashmir Martyrs Day is being observed across the country including Azad Jammu and Kashmir (AJK) today to pay homage to 22 Kashmiris martyred by the troops of Dogra Maharaja on July 13, 1931, for appearing outside the Central Jail in Srinagar in support of Abdul Qadeer who was charged for propelling people to defy the Dogra Rule.

Functions and seminars will be held across AJK to pay tribute to the martyrs on this day.