Karachi court sends 'ice' peddler to jail for one year 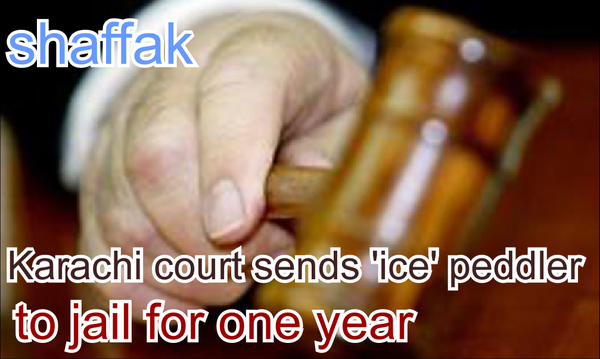 A Karachi court on Tuesday awarded one-year jail imprisonment to a convicted drug peddler who was found guilty of selling 'ice' – a dangerous drug – to students in the metropolis.

Rohail Shakeel was found guilty of selling the notorious substance in the Defence Housing Authority and arrested in 2018.

The judge awarded 16-months imprisonment to the accused and also imposed a fine of Rs11,000.

According to police, the convict was arrested from Khayaban-e-Abbasi in DHA's Phase-VIII on Dec 27, 2018. Police had also recovered 110 grams of the 'ice' drug and 150 grams of hashish from his possession.

Earlier, during a hearing of the case, the state prosecutor had argued that the accused used to sell the drugs to drug addicts, including students. The prosecutor pleaded to the court to punish the accused strictly in accordance with the law.

On the other hand, the defence counsel had countered the allegations and claimed that the man was framed in the case by police with malafide intentions. He had pleaded to the court to acquit the man of the false allegations.