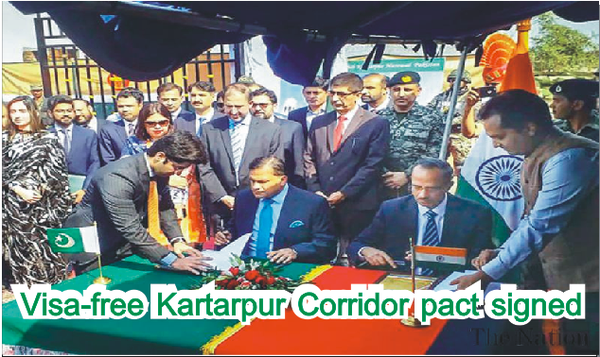 LAHORE - Amid heightened tension at the Line of Control and the bilateral relations being at all-time low, Pakistan and India on Thursday signed a historic Kartarpur Corridor agreement, allowing Sikh pilgrims visa-free access to their religion’s holy site in Punjab’s Narowal district. Director General South Asia and SAARC Dr Mohammad Faisal from Pakistan and Joint Secretary for Home Affairs SCL Das from India inked the agreement at the Zero Point demonstrating the two countries’ will to make difficult things happen against all odds born out of Kashmir imbroglio. The development comes after three rounds of protracted negotiations between the two arch-rivals in a situation when the two countries are hectically engaged at the diplomatic as well as military fronts following India’s decision to abrogate the special status of Occupied Kashmir.

Faisal explained that pilgrims will be facilitated seven days a week from dawn till dusk. “Under the agreement, India will provide a list of pilgrims ten days before their visits so that they could be properly received,” he said, adding the first group will arrive at the pilgrimage site using the corridor on November 9. The Foreign Ministry official confirmed that Islamabad will allow 5,000 pilgrims daily and “and if there is more capacity we will accommodate them too”. The spokesperson further said that details of the agreement will soon be shared but added that the Sikh pilgrims will have to carry their passports and they will also be charged $20 fee to have access to their religious site. He said the $20 service fee to be charged was less than one-third of the expenses to be incurred per person.

The FO official also lauded his team’s efforts, saying negotiating with India were not easy “because of the history the two countries share”. The shrine is about four kilometres from the border. The crossing and corridor, including a road, bridge over Ravi River and immigration office, will replace a drawn-out visa process and circuitous journey through Pakistan. Dr Faisal believed that this was going to be the largest Gurdwara in the world given the vast network of connecting roads Pakistan had built along with a big reception centre provided there.

Dr Faisal said the pilgrims would require only valid passports to be scanned only and not stamped. The whole process will take around two to three minutes allowing the visitors to stay at the Gurdwara from morning till evening. The first batch of pilgrims, he said, will visit the Gurdwara Dera Baba Nanak on November 9th as the corridor will be inaugurated by Prime Minister Imran Khan. He said the government of India would share, through designated nodal points, details of the pilgrims ten days prior to their entry through Kartarpur Corridor.

To a question on Jammu and Kashmir, he said Pakistan was standing firm on its stance and there will be no change on its position. “I am saying this right now standing within the premises of Kartarpur Corridor,” he averred. The agreement allows 5,000 Sikh pilgrims to visit the Gurdwara without visa and on valid Indian passport, in shape of group or individuals. The overseas Sikhs will be permitted to use Indian Origin Card to visit the holy site. Also, Dr Faisal said FWO deserved commendation for completing the enormous task in just one year which was earlier estimated to take around three to five years. According to the agreement, a Joint Working Group will be constituted by the parties for facilitating its smooth implementation.

The agreement will remain valid for five years unless terminated earlier and both sides may extend the duration by mutual consent in writing. The designated nodal points between the Pakistan Rangers and India’s Border Security Force will deal with emergencies and exigencies including medical evacuation of the pilgrims.The agreement binds Pakistan and India to establish requisite infrastructure including construction of a bridge at Budhi Ravi Channel, faciltiation centres and security-check counters for smooth and hassle-free movement of pilgrims. Meanwhile, in a statement on Monday last, India’s Ministry of External Affairs said New Delhi took initiatives to “put in place the state of art infrastructure” and open the corridor for Sikh pilgrims to visit Gurudwara Kartarpur Sahib in Pakistan.

l Passport to be scanned, not stamped

l Corridor to remain operational throughout the year, except on notified days or exigencies

l Opening hours from dawn to dusk; pilgrims to return the same day

l $20 service fee to be charged per pilgrim

l Pilgrims allowed to travel as individuals or in groups, and even on foot