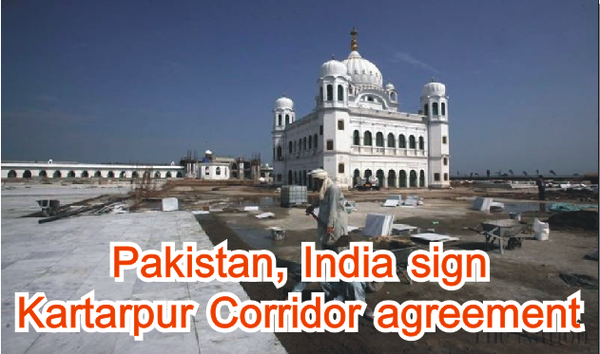 Pakistan and India signed the Kartarpur Corridor agreement at Zero Point of Wagah border on Thursday.  The significance of the signing of the bilateral treaty between the two sides comes at a time when bilateral relations are at an all-time low and no high-level meetings between the two sides have been held. While there have been several agreements between the two sides, very few have been signed by them. In 1974, a Bilateral Agreement on Protocol on Visits to Religious Shrines was signed. Sikh Yatrees will be permitted to visit the Gurdwara Kartarpur Sahib from morning till evening. 5,000 Yatrees will travel through the corridor, Dr Faisal said while addressing the media after the signing of the agreement.

“There will be a $20 per visitor per visit, as service charges.” Dr Faisal said, adding that the prime minister will inaugurate the corridor on November 9.  Pakistan says it is still working on the invitations for the inauguration of Kartarpur Sahib Corridor, though one was sent to former Indian prime minister Manmohan Singh who hails from a village Gah in Indian Punjab. Prime Minister Imran Khan would inaugurate the facility on the scheduled date as construction work has entered the final stage, the ruling Pakistan Tehreek-e-Insaf party announced.

The inauguration of Kartarpur Corridor would coincide with the birth anniversary celebrations of founder of Sikhism Baba Guru Nanak Sahib. "Pakistan is all set to open its doors to Sikhs from all across the globe," the PM wrote. "The world's largest Gurdwara will be visited by Sikhs from across India and other parts of the world," he said.

The prime minister said the Kartarpur Corridor will be a major religious hub for the Sikh community. "(It) will boost the local economy (and) result in earning foreign exchange for the country creating jobs in different sectors including travel and hospitality." Pakistan handed the final draft of the proposed bilateral agreement over to India on October 11 and also accepted New Delhi’s demand to allow devotees of other faiths – Hindus, Christians, Zoroastrians etc – to visit Baba Guru Nanak Devji’s final resting place.