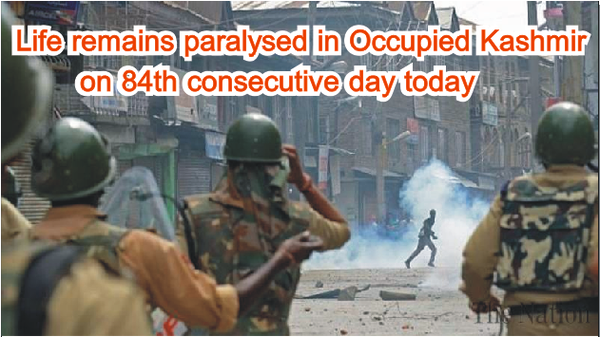 In occupied Kashmir, life remains paralysed in Kashmir Valley and Muslim majority areas of Jammu region on the 84th day, as Kashmiris on both sides of the Line of Control and the world over are observing Black Day, today. According to Kashmir Media Service, amid call for march towards Lal Chowk, Srinagar, and a sit-in protest by All Parties Hurriyat Conference, today, normal life continues to hit badly due to restrictions and gag on internet and most of cellular services. Internet services — across all platforms — continue to be snapped across the valley since the night of 4th August — hours before India announced its decision to abrogate Article 370 of the Constitution, which gave a special status to Jammu and Kashmir, and bifurcate J&K into two Union territories.

Restrictions have been further tightened in the territory in view of the call for the march towards Lal Chowk. The deployment of Indian forces has been increased. People continue to observe shutdown with main markets continue to shut, public transport off the roads and school buildings deserted look without students and staff as a mark of silent protest against India’s illegal action on 5th August.

CPI-M General Secretary Sitaram Yechury in a statement termed as “preposterous” Indian Prime Minister Narendra Modi’s claim that the turnout in the recently held Block Development Council (BDC) elections in Jammu and Kashmir was an indication of the region’s faith in democracy. India’s National Investigation Agency (NIA) in a chargesheet filed against Dukhtaran-e-Millat chief Aasiya Andrabi said that she had played a major role in closure of cinemas in Kashmir Valley.