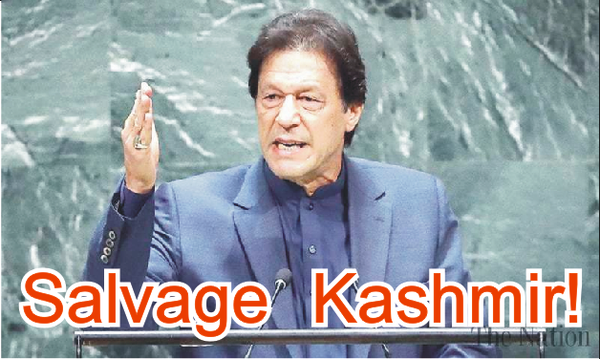 UNITED NATIONS    -   Prime Minister Imran Khan on Friday put the case of Kashmir and Pakistan before the United Nations General Assembly in very logical and forceful manner. Mincing no words in his candid address to the world leaders, he called out Indian Prime Minister Narendra Modi’s extremist government for oppression of Kashmiris. Warning of a “bloodbath” the in the Indian-occupied valley, he demanded immediate lifting of the “inhuman” curfew there and urged the world community to play their role in getting the Kashmiris their right to self determination. “This is a test for the United Nations. You guaranteed the right to self-determination to the people of Kashmir,” he reminded the 74th session of the United Nations General Assembly (UNGA).

An emotionally charged Khan spoke far beyond his allotted time to apprise the world of the persecution of innocent men, women and children in Kashmir at the hands of Indian occupational forces, who had illegally placed a population of eight million under detention, in utter disregard to the human rights. He urged the United Nations to ask India to lift the inhuman curfew, continuing for the past 55 days, and return the 13,000 young boys lifted from their homes by the Indian security forces. “What kind of a mindset locks up 8 million people? Women, children, sick people. What I know of the West, they wouldn’t stand for 8 million animals to  be locked up. These [Kashmiris] are humans,” Khan said amidst a loud applause. Attired in a blue traditional Pakistani dress, Premier Khan said he was there at the UNGA at one of the most critical times his country was facing. He warned of the consequences if the world community failed to realise the gravity of the situation confronting the two nuclear armed countries.

The prime minister repeatedly warned of another Pulwama sort of attack and said it would be the result of radicalisation due to the persistent denial of justice to the Kashmiri people. He said Pakistan would be blamed should something happen and recalled how the two nuclear armed nations almost went head to head in February. “And this is why the UN has a responsibility. This is why you came into being in 1945! “ Imran Khan said. He categorically stated that he was not threatening about a nuclear war. “It is a worry. It is a test for the United Nations. You are the one who spoke about the Kashmiris’ right to self determination. This is not the time for appeasement like that in 1939 in Munich.

“Will the word community appease a fascist or will it stand up for justice and humanity?” Imran Khan said, “If a conventional war starts between two nuclear countries anything could happen. It would have consequences, far beyond the region.” “Supposing a country seven times smaller than its neighbour; faced with a choice - either you surrender, or you fight till the end? And my belief is There is no God but Allah. We will fight,” said Premier Khan amidst an applause. The prime minister recalled the statement of Indian army chief, who spoke of 500 terrorists in Pakistan getting ready to launch attacks in India and questioned as to why would Pakistan send only 500 when there were 900,000 Indian troops in the held Kashmir.

The prime minister pointed to the rapes of thousands of Kashmiri women at the hands of Indian army troops, as pointed out in the two UN reports, the deaths of 100,000 Kashmiris, the detention of the entire Kashmiri political leadership, the abusive use of pellet guns against unarmed civilians, blockade of communication links and deployment of 900,000 security personnel to quell the freedom movement. Imran spoke at length about the 11 violations committed by India against the UN resolutions, including the one against its own Constitution and the bilateral Simla agreement with Pakistan. “What will happen when the curfew is lifted? Modi says this is done for the prosperity of Kashmir. But what will happen when 8 million Kashmiris come out of a lockdown and face 900,000 troops? I fear there will be a bloodbath.”

Imran Khan said, “You think Kashmiris will accept a new status quo under revocation of Article 370. 100,000 Kashmiris killed, thousands of women raped. UN reported on this.” He regretted that the world knew about it, however, it remained quiet as it saw India as a huge market. “Materialism has trumped humanity,” Imran Khan said and questioned, “Will the world go for a market of 1.2 billion people, or for justice and humanity?” PM Imran Khan pointed out that Indian Prime Minister Narendra Modi had been reciting the mantra of “Islamic terrorism” as he did not have any other argument. The phrase “Islamic terrorism”, he said, allowed India to dismiss human rights and increase persecution of the people of Kashmir.

The prime minister pointed out that Narendra Modi was a member of the fascist RSS party, which believed in racist cleansing of the Muslims. The RSS (Rashtriya Swayamsevak Sangh) believed in the ideology pursued by Hitler and Mussolini of racial purity. The understanding of that ideology was vital in understanding the state of things happening in the occupied Kashmir. He said the RSS believed that the golden age of Hinduism came to an end because of the Muslim empire. The RSS bred on an ideology of hate, which later led to the murder of Mahatma Gandhi. Describing the Khaki clad RSS workers as “goons”, Imran Khan said they were responsible for the butchering of 2,000 Muslims in the Indian state of Gujarat, while Modi was the chief minister. Some 150,000 Muslims were made homeless.

And now, he said, women, children and sick had been locked up (in the held Kashmir) as if they were animals. “They are human beings ... If you lock up even animals like these, the RSPCA in London [UK’s animal welfare charity] would make it a big issue.” He said the acts of the fascist RSS backed government were leading to radicalisation of the Muslims. Following years of persecution, he added, the Kashmiris would be radicalised and feared that there would be more Pulwama like incidents. He said 180 million Muslims of India were also watching what was happening to the eight million locked up in held Kashmir by the Indian army and so were the 1.3 billion Muslims around the world. He warned that if there was a bloodbath, after the lifting of curfew, they would react as they saw that no justice was being done. “How would the Jewish community react if even 8,000 Jews were under lockdown? How would the Europeans react? How would any human community react? Are we children of a lesser God? Don’t you know this causes us pain,” Imran Khan said.

Imran told the world that any insult to Holy Prophet Muhammad (Peace Be Upon Him) gives pain to the Muslims and called for not using the freedom of speech to insult the Prophet Muhammad (PBUH). “The prophet (PBUH) lives in our hearts. When he is ridiculed, when he is insulted, it hurts us. As we humans know… that pain of the heart is far far far more hurtful than the physical pain. And that is why the Muslims react,” he said.

He said he had always thought of explaining the subject to the world community, especially the Western community who do not look at the religion as the Muslims do. “That’s all we ask. Do not use freedom of speech to cause us pain by insulting our Holy Prophet. This is what we want,” the prime minister said while referring to the sensitivity Jews show to the holocaust which also gave them pain. He said after 9/11, Islamophobia grew alarmingly in the West, which was marginalizing the Muslim communities and could also radicalise them. Even wearing Hijab (veil), he said, had become an issue in some countries. “Hijab is some sort of weapon (for them).”  It started after 2001 when some of the world leaders equated Islam with terrorism, he added.

“There is only one Islam. What is radical Islam or Islamic terrorism? … Terrorism has nothing to do with any religion,” he said. He said the use of phrases like Islamic terrorism and radicalism were the main reasons behind Islamohobia, which had caused pain to Muslims. He said the world must address the issue, though unfortunately even the Muslim leaders did not address it either. The prime minister said instead of addressing the issue, the Muslim leaders proclaimed as liberals coined a new term of enlightened moderation. He said suicide attacks were another factor behind Islamophobia as in the 9/11 incident, the attackers blew themselves up but Islam should not be blamed for such acts.

The world, he said, must know that Tamils were the first suicide attackers in Sri Lanka, but no one blamed Hinduism. The Japanese Kamikaze had initiated suicide attacks in the Empire of Japan but no one blamed their religion too, he added. He said the Western society did not treat the religion as the Muslims do, though some sections intentionally provoked the sentiments. Apprising the world leaders of the State of Medina, the prime minister said it was the first welfare state that took responsibility for the weak, orphans, widows and handicapped, besides introducing progressive taxation and guaranteeing equal rights for slaves and minorities regardless of colour and creed. He said if any Muslim society did injustice to a minority, it was in fact violation of the Islamic teachings.