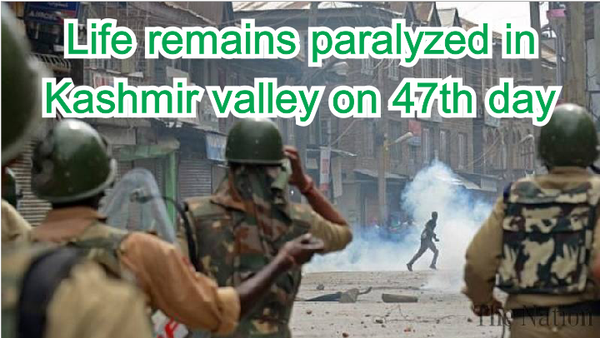 Normal life remains paralyzed in the Kashmir valley due to continued Indian military siege for the 47th consecutive day, Friday. Thousands of Indian troops remain deployed in every nook and corner, creating an atmosphere of fear. People are reluctant to come out of their homes and prefer to remain indoors.

The residents are virtually observing civil curfew to register their protest against scraping of special status of occupied Kashmir by the Indian government. All markets, business establishments and shops are closed while transport is off the road. Educational institutions are deserted.

The efforts of the authorities to open schools have not borne fruit as parents continue to keep children at home due to apprehensions about their safety. Presence of government employees in the offices remains thin. Communications links including internet and mobile phone services remain suspended and TV channels closed in Kashmir valley and Muslim majority areas of Jammu.

On the other hand, a US court has asked Indian Prime Minister, Narendra Modi, and other members of his government to respond within 21 days to the charge that they have illegally occupied the territory of Jammu and Kashmir and are committing gross human rights violations there.

The action has been taken on a complaint filed by the Kashmir Khalitsan Referendum Front in a US district court, in Houston, Texas, where Modi is scheduled to address a joint rally with President Donald Trump on September 22. The Front has complained that the Modi-led government had illegally annexed Kashmir on August 5 in violation of international laws.

It has also nominated Indian Interior Minister, Amit Shah, and another functionary, Kanwal Jeet Singh, as the accused responsible for this illegal occupation and for committing gross human rights violations in the territory. The rights abuses include imposition of a prolonged and unprecedented curfew, complete communication lockdown, denial of basic necessities to the inhabitants, illegal detention, enforced disappearances, torture and extrajudicial killings.