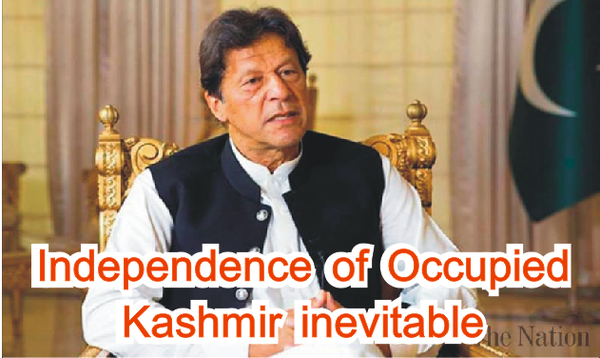 ISLAMABAD - Warning Kashmiris not to indulge in any activity which India could exploit in the name of Islamic terrorism, Prime Minister Imran Khan Wednesday predicted that independence of Indian occupied Jammu and Kashmir is now impending.“Indian Prime Minister Narendra Modi has cut off his hands by annexing the occupied Kashmir on August 5 which would eventually lead to its independence”, Prime Minister Khan said while addressing the special session of AJK Legislative Assembly in Muzaffarabad. “On that day, Modi made a fatal mistake, one that he could not step back from. India cannot continue in this manner any longer. They have detained eight million people in an open jail,” the prime minister said. He noted had the Modi government not taken that step, Pakistan could not have said anything to the world as prior to the events of August 2019; no one was paying attention to the Indian atrocities in the valley.

He vowed to further accelerate efforts to highlight the plight of oppressed Kashmiri people at the international level. “Hopefully Kashmir will now move towards independence,” Prime Minister Imran said. “Our job now is to inform the world about what is happening in the valley on all forums,” he added. The Prime Minister said the Indian civilian and military leaders are giving threatening statements against Pakistan under depression because of following the ideology of Hindutva. He said the Indian leadership is appeasing the people with extremist mindset in their country as the last refuge of every scoundrel is patriotism.

This is the reason that the world’s media today is raising questions on the hatred based ideology of Modi government. People within India have also started a movement condemning the controversial legislation.He said that Modi cannot put the genie of Hindu nationalism back into the bottle and if he moves ahead with his policies he will have to face severe resistance as these will affect not only Muslims but also other minorities in India including Sikhs and Christians. “They hide behind nationalism and then make such claims. Worried people make such statements, and they are now worried,” he noted.

He warned that India’s situation will continue to deteriorate with time. “In desperation, Modi said that he will defeat Pakistan in 11 days. The head of a country, giving such a statement when both countries in question are nuclear powers, cannot be normal”. He urged the international community not to play into India’s trap, predicting that they will either use terrorism as an excuse or conduct a false-flag operation to inflict more torture on the people of occupied Kashmir. Prime Minister Imran Khan said that they would have proceeded to do so had Islamabad not raised the issue in front of the whole world and recalled that Modi’s regime had stated its wishes to change the region’s demography, from a Muslim-majority to a Muslim-minority.

The prime minister said Pakistan should continue moving cautiously, contesting the case of Kashmir diplomatically and politically. He said not only EU Parliamentarians and the US politicians are speaking in favour of Kashmiris but the international media is also appropriately highlighting the plight of the Kashmiri people. Commenting on Islamic terrorism, he said: “Religion and terrorism are not linked. Since 9/11, Muslims have been persecuted due to Islamic terrorism. Therefore, we have to be very careful about what their game plan is.” The prime minister acknowledged that the issue got drifted after it was raised at the UN General Assembly, at a time when it was at its peak, due to the storm that was headed to Islamabad by JUI-F Chief Maulana Fazlur Rehman against the government last year and later converged into a sit-in staged.

“We should not give them any chance. This is a political, and a diplomatic fight as well as in the media. And for the first time since the 60s, international media is presenting Pakistan’s stance,” he added. Imran Khan said the Pakistan government in consultation with the Kashmiri leadership in Azad Kashmir will prepare a plan to take the Kashmir issue at the next level. He said the entire world will be moved over the issue. He said overseas Pakistanis and Kashmiris can play a very effective role in this regard. On the domestic front, the Prime Minister reiterated the commitment to steer the country out of difficult times and make Pakistan a great nation.

In a related development, Prime Minister Imran Khan assured a delegation of All Parties Hurriyat Conference (APHC) of total resolve of his government to raise the voice of the people of Kashmir at all global forums.The delegation of All Parties Hurriyat Conference, led by Syed Abdullah Gilani and Syed Faiz Naqshbandi separately called on the Prime Minister Khan in Muzaffarabad.They discussed matters pertaining to prevailing situation in Occupied Kashmir, illegal actions of BJP-led government in the held territory, ruthless curfew and communication lockdown, and brutalities and atrocities committed by Indian troops in Occupied Kashmir.

The prime minister said that fascist face of BJP-led regime, which is pursuing the RSS philosophy, stands exposed before the entire global community. Imran Khan expressed resolve that the Indian government has failed to suppress the voice of the eight millions innocent people of Kashmir through use of brute force. The prime minister said that Pakistan will continue its moral, political and diplomatic support to people of Kashmir in achieving their Right to Self-Determination. He expressed regret that international community has kept mum over massive human rights violations committed by Indian troops in Occupied Kashmir. The delegation thanked the prime minister for highlighting the Kashmir cause at all international forums.  It also presented recommendations to the prime minister for amicable solution of Kashmir issue.