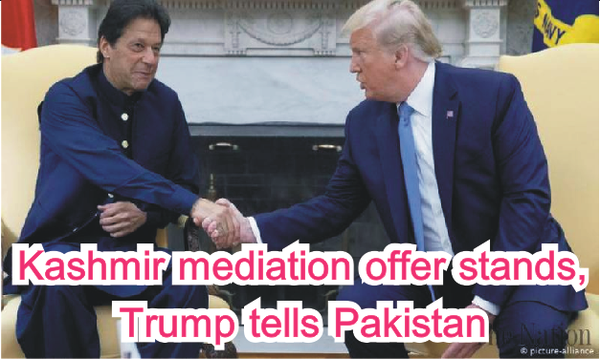 United States President Donald Trump has told Prime Minister Imran Khan that his mediation offer on Kashmir still stands and he will use his influence on India to defuse tension with Pakistan, officials said. Senior government officials said Trump - who called PM Khan last day to acknowledge Pakistan’s help for the release of two professors held captive by the Afghan Taliban – showed concern over the tension in South Asia after India illegally merged Kashmir into its union territories. “Imran Khan thanked the US President and believed the US can play a meaningful role on the Pak-India tension. There was a consensus on moving forward on the Afghanistan issue as well,” one official told The Nation. The official said Iran issue was also discussed and the PM showed optimism about Iran-Saudi Arabia peace. Another official said President Trump said the US can even host Pak-India talks if both the parties agree. “He (Trump) promised to contact India on the Pak-India tension and use his influence (for peace),” the official added.

The Afghan Taliban released two hostages - Kevin King from the US and Timothy Weeks from Australia – this week in a prisoner exchange deal with the Afghan government. The American and Australian were exchanged with three Taliban leaders, including key militant figure Anas Haqqani. Earlier, Trump and PM Khan held a telephone conversation with US President Donald Trump and discussed with him bilateral and regional matters, including the Afghan peace process and the Kashmir issue. PM Khan conveyed to President Trump that the release of Western hostages in Afghanistan was a positive development and Pakistan was happy that they were safe and free. Tensions between Pakistan and India escalated after New Delhi illegally revoked occupied Jammu and Kashmir’s special status on August 5. Pakistan has been trying to internationalise the Kashmir issue but India claimed the removal of special status of Kashmir under Article 370 was its ‘internal matter.’

Appreciating President Trump's continued engagement as well as mediation offer, Prime Minister Khan stressed the US President must continue his efforts for facilitation of a peaceful solution of the Kashmir issue, the statement said. Trump has repeatedly offered to mediate between Pakistan and India resolve the Kashmir issue. New Delhi has been claiming that Kashmir was a bilateral matter between Pakistan and India with no scope for third party mediation. Recalling their conversations in Washington and New York, the two leaders agreed to deepen bilateral collaboration, including in relevant multilateral fora. This week, Foreign Minister Shah Mehmood Qureshi said the US and the Afghan Taliban will soon return to the talks table as a result of Islamabad’s efforts. The FM said Pakistan played an important role for the release of Kevin King and Timothy Weeks. “These are the right steps towards peace. We hope peace will return to Afghanistan soon,’ he added Qureshi said Pakistan was playing a lead role for peace in the region. “We have done this for regional peace. With our help, the US and Taliban are returning to the talks table,” he said.

Pakistan had brought the US and Afghan Taliban back to the talks’ table after President Trump called off the dialogue in September. President Trump had halted the talks, aimed at a plan to withdraw US troops from Afghanistan in exchange for Taliban security guarantees, following the death of a US soldier and 11 others in a Taliban bomb attack in Kabul. US peace talks with the Taliban are now “dead,” President Trump declared, one day after he abruptly cancelled a secret meeting he had arranged with Taliban and Afghan leaders aimed at ending America's longest war. International relations expert Dr Huma Baqai said the US can help defuse Pak-India tension by pressing India. “Pakistan had taken appropriate measures to sensitize the international community regarding Kashmir issue,” she said. Pakistan, she said, should continue exposing Indian atrocities at every international forum. “The India government is a political wing of RSS and its ideology is based on extremism and hatred against Muslims. The world should take notice,” she maintained.