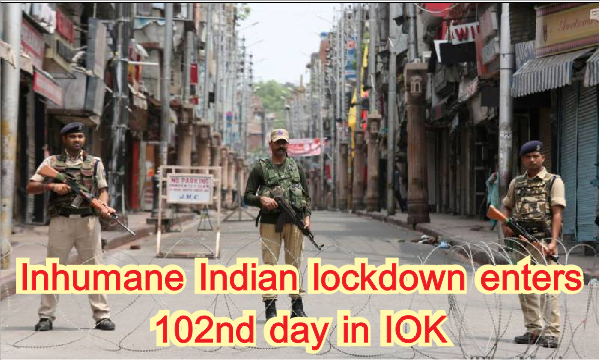 In occupied Kashmir, normalcy continues to elude the Kashmir Valley and Muslims-majority areas of Jammu and Ladakh regions as inhuman Indian military lockdown entered 102nd running day on Thursday, Kashmir Media Service reported. Restrictions under section 144 are enforced. Although majority of the landline connections are functioning and voice calls on postpaid mobile phones are allowed but the residents continue to suffer immensely due to suspension of internet across all platforms, SMS and prepaid cellular services. People in the Valley are resisting Indian attempts to show some signs of normalcy returning in the territory by observing civil disobedience. As part of this informal movement, shopkeepers keep their shops shut for most part of the day and students stay away from educational institutions. Offices also witness thin attendance and most of the public transport is off the roads.

Meanwhile, as per a report, the Indian Army will soon use robots during cordon and search operations in occupied Kashmir. These robots will be helpful in negotiating obstacles to lob grenades at the freedom-fighters inside buildings. The Indian Ministry of Defence has already started the process of procuring around 550 robotic surveillance units with minimum 25 years of service life.

On the other hand, Europe-based disinformation watchdog has cracked open a nexus of dormant companies including think tanks, NGOs and fake media outlets lobbying India’s diplomatic interests. An investigation by EU Disinfo Lab, an NGO tracking sophisticated disinformation campaigns targeting EU countries and institutions, has listed some 265 such fake media outlets across 65 countries. These platforms allegedly promote India’s geopolitical interests in the EU and also the UN by constantly targeting Pakistan. The entire campaign ultimately dovetails with India’s August 5 move, and garner support for the New Delhi at international fora. The recent controversial visit of members of European Parliament to the Kashmir Valley is also linked to such a global network of think tanks, NGOs, and media outlets.