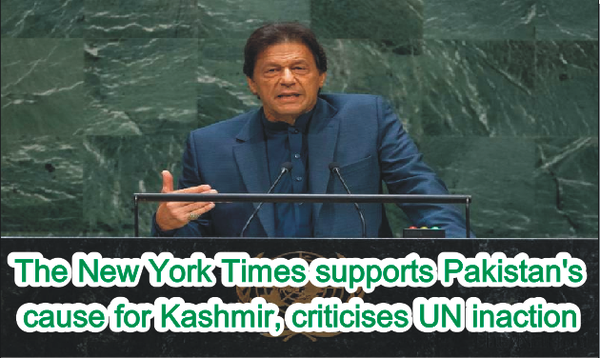 The New York Times Editorial Board backs Prime Minister Imran Khan's stance against India on the subject of its actions in Indian-occupied Kashmir in its latest opinion titled "The U.N. Can’t Ignore Kashmir Anymore". Urging the UN Security Council to demand that India uplift its communications blockade of the Kashmir Valley, the newspaper also noted that the Pakistani prime minister was a man on a mission.  "While Mr. Modi may think he can control this volatile conflict on his own, he almost certainly cannot," the NYT wrote. It also said that the dismal response of the UN was "a sad sign of the dysfunction in international diplomacy as American leadership declines and divisions among world powers grow," as it put it.

The editorial also noted that while US President Donald Trump had repeatedly made offers to "mediate" between Pakistan and India on the subject of the Kashmir dispute, his government's relations with Modi's India had not altered since the Kashmir blackout in August. Modi, notes the article, was joined by Trump in a rally in Houston where the Kashmir dispute was not even referred to.  The NYT also blasted the Indian prime minister for what it called his absurd assertion that revoking Article 35a meant “people there have got equal rights” with other Indians now, in total disavowal of the heavy censorship and communications blockade in force in the Valley to this day.