Kashmir not an internal matter of India 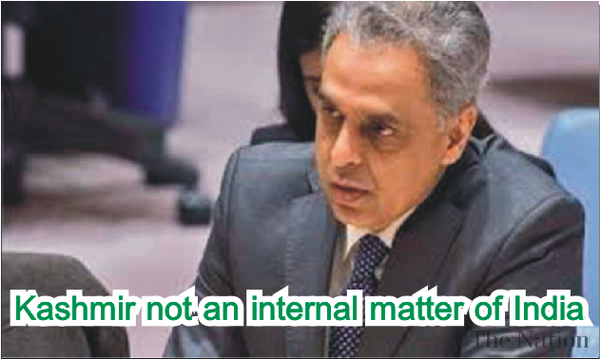 ANKARA    -    Kashmir is not an internal matter of India, speakers gathered at an international conference in the Turkish capital agreed on Wednesday. “There is but one fair, just, legal and moral solution to Kashmir, which was provided by the United Nations acknowledging the right of the people of Kashmir to determine their own future through an impartial plebiscite under the UN auspices.” This was the message that came out loud and clear from a two-day international conference on Kashmir titled, “Kashmir Turmoil: Emerging Threats to Peace and the Role of International Community” organized by Lahore Center for Peace Research in collaboration with Turkish Think Tank “Institute of Strategic Thinking” (SDE) on November 20-21, 2019, in Ankara, Turkey.

Eminent speakers from several countries including Iran, Pakistan, Turkey, Indonesia, Malaysia, Sri Lanka, Russia, Germany, Netherland, United Kingdom and United States participated in the Conference which was co-chaired by LCPR Chairman, Pakistan’s Former Foreign Secretary Shamshad Ahmad and President of Institute of Strategic Thinking (SDE) Muhammet Sawas Kafkasyali. The Conference was attended by a distinguished audience consisting of parliamentarians, academia, members of the diplomatic corps, journalists, members of think tank community and students. In his keynote address, Sardar Masood Khan President of Azad Jammu & Kashmir called upon the world community, especially world’s major powers, to prevent the impending risk of genocide in the Indian occupied Kashmir and also to save the region from the scourge of war. He stressed that another India-Pakistan conflict on Kashmir could quickly escalate into a nuclear war with consequences f unimaginable magnitude.

In his message to the Conference, Turkish Foreign Minister Mevlüt Çavuşoğlu reiterated his country’s principled position on Kashmir as enunciated by President Recep Tayyip Erdogan at the 74th Session of UN General Assembly, calling for an early solution of the 72-year old issue through dialogue and engagement on the basis of justice and equity. He also called for an end to the virtual blockade of the 8 million people being kept under siege in Indian-occupied Kashmir. In his special message to the Conference, Pakistan’s Foreign Minister Shah Mahmood Qureshi highlighted the gravity of the Kashmir situation and called upon the world community to take notice of the aggravating human rights situation in Indian-held Kashmir where in violation of UN Security Council resolutions, India is trying to change Kashmir’s disputed status as well as its demographic composition.

Sherry Rehman, a senator from Pakistan, said: “India is trying to redefine the global order [...] It is doing it by use of power, not soft power.” Rehman said India’s unilateral actions in Kashmir is a “slap on the face of international community and United Nations”. “India’s attempt is not to just contain the resistance [of Kashmiris] but also contain the [Kashmir] story… not to let the news filter out,” Rehman said, about the communications blackout imposed by India in the aftermath of the change in status of the Muslim-majority state. India has since gradually eased the lockdown partially restoring cell phone services.  Shamshad Ahmad Khan, a former Pakistani diplomat, warned that if the Kashmir dispute remains unresolved “it will have disastrous consequences as it has become a virtual nuclear flash point”. Khan, who is also chairman of the Lahore Center for Peace Research, said: “India has tried to silence Kashmiris in past. It did not work and it will not work in future too.” Turkey’s Nationalist Movement Party (MHP) lawmaker Erkan Akcay said that world faces six key problems: Jerusalem, Cyprus, Kashmir, Crimea, Kashgar (Xinjiang). “If these issues are solved the world will become a better place to live,” he said.