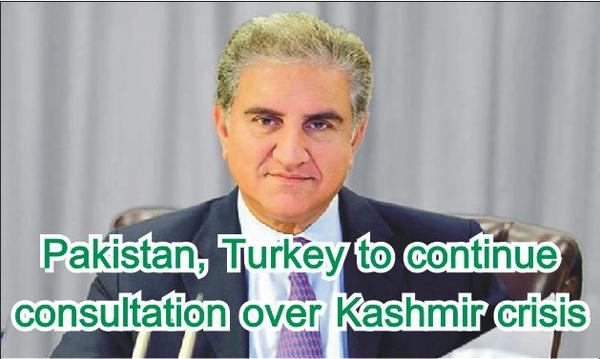 Foreign Minister Shah Mehmood Qureshi on Tuesday contacted his Turkish counterpart Mevlut Cavusoglu and exchanged views over the latest situation of the Indian occupied Jammu and Kashmir and regional peace.

The foreign minister apprised Mevlut Cavusoglu regarding the deteriorated situation of Kashmiris as the curfew imposed by the Indian authorities entered into its 30th day. “India has continued imposition of curfew in the occupied Jammu and Kashmir since August 5 which risked thousands of lives there besides occurrence of the severe shortage of food and medicines for the Kashmiris.” Qureshi urged his counterpart to play his role to end the Kashmir crisis which is deepening day by day with the increasing risks of a regional conflict.

He further said that the ties between Pakistan and Turkey are historical, social and cultural. Qureshi said that the stances of both countries are quite similar regarding the regional matters, whereas, Islamabad and Ankara have always supported each other in tough times. The foreign minister also praised the efforts of  Turkey for playing a vital role for the unity of Muslim Ummah. During the telephonic conversation, the foreign ministers agreed to continue bilateral consultations over the Kashmir issue and regional peace.