These eyes say to the world...CAN YOU NOT SEE 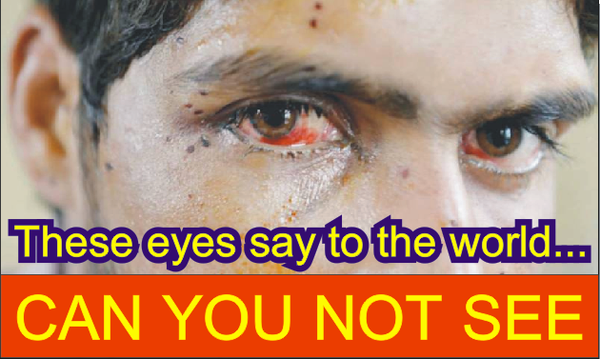 Kashmir, nestled in the roof of the world, the jewel in the crown of the sub-continent. It was always known as “paradise on earth”; people across the world striving to see its majestic, scenic wonders. Today that verdant land is permanently hidden from sight, its guardian mountains a prison of granite, its people living under what can only be described as demographic apartheid and an economic curtain.

The brutal subjugation of Kashmir and its people and the denial of their right to self-determination was atrocious in 1947; it has only gotten worse over the decades. The Indian military and police tried to ground the spirit of the Kashmiri people into dust with brute force, only to face an unbreakable resolve to achieve freedom.  On August 5th, 2019, Indian illegal actions reached new heights.

The Valley was cut off from the world — medicine, supplies, basic communications were blocked. What brutalities have happened in the last 365 days we can only imagine. A global pandemic ravaged the world, but the Valley remained the same – an open-air prison, a military siege. The illegal actions of the Indian military are unacceptable. So is the willful ignorance of the world, the way many have looked the other way.  The current situation in the Indian illegally occupied Jammu and Kashmir is unsustainable. The world has an obligation to Kashmir under the United Nations resolutions. The world must act now. The ticking time bomb of this crisis can, otherwise, spiral into unimaginable consequences.

A demographic apartheid since August 5, 2019

1,390 people critically injured due to the use of brute force by Indian troops

214 martyred, 1,390 injured by Indian troops during one year siege

13,680 people arrested, including aged woman and half a dozen girls

The entire illegal occupied Kashmir turned into an open-air prison

The internet 4G services suspended in occupied Kashmir on August 5, 2019

After the custodial killing of prominent young Kashmiri resistance leader, Shaheed Burhan Wani on July 8, 2016, the troops injured 10,240 by pellets and blinded over five dozen while eyesight of 385 was damaged