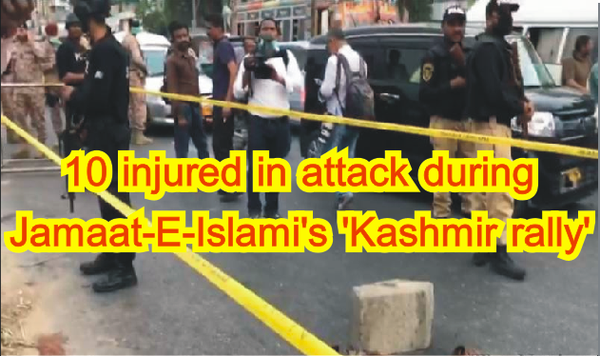 At least 10 people were injured here when suspected terrorists hurled a hand grenade during a Kashmir rally, according to police. The rally was organized by Jamaat-e-Islami (JI), the country's mainstream religious party, in connection with the first anniversary of India's revoking Jammu and Kashmir's decades-long special status.

Two suspected terrorists on a motorcycle threw a grenade at protesters in the city's eastern district and fled, police said. There was no immediate claim of responsibility. JI spokesman Zahid Askari told that at least five activists were critically injured, while others sustained minor injuries.

The rally continued despite the attack, he added.  JI Chief Senator Sirajul Haq said activists would not cower to "cowardly" attacks. He blamed "Indian agents" responsible for the attack, who could not digest the expression of solidarity with Kashmiris.  Pakistan observed "Exploitation Day" Wednesday to condemn New Delhi's annexation of the disputed Jammu and Kashmir region.