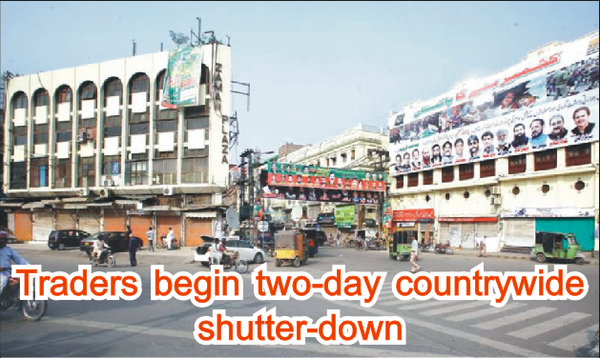 ISLAMABAD/LAHORE - A two-day shutter-down strike against the controversial tax reforms by the government began on Tuesday, bringing the commercial activities to a standstill throughout the country. Most of the markets, shopping centres and shops remained shut in Islamabad, Karachi, Lahore, Peshawar, Quetta, Faisalabad, and even in several cities of Azad Kashmir. The business community pressed ahead with the protest strike as the talks between federal government and traders ended inconclusively after the former refused to accept the demand of latter especially withdrawing of condition of CNIC.

Traders went ahead to record their protest against the taxation policies of the government especially making mandatory for all buyers to show their Computerised National Identity Card (CNIC) while making purchases over Rs50,000 from a sales tax registered person. In Islamabad, all major markets including Super, Jinnah Super, Aabpara, Melody and small businesses remained closed. However, few shops were opened in the city. Adviser to Prime Minister on Finance and Revenue Abdul Hafeez Shaikh has invited traders for meeting to resolve the issue. Talks between the two sides continued for around five hours. However, both sides failed to evolve consensus over the tax issues.

Traders informed the media that government is not withdrawing the CNIC condition due to pressure from the IMF. They said government should introduce the fixed taxation system and eliminate the process of making traders as withholding agents. They demanded that government should reduce the turnover tax to 0.25 percent from 1.25 percent and make the tax form easy. Putting up a positive spin to the dialogue process, Hafeez Shaikh told the media that talks with traders are underway. “Economic growth of the country is not possible without the support of traders,” said Shaikh, adding over three million traders are not paying tax, therefore, efforts are being made to bring them in tax net to divide the economic burden.

ICCI officebearers appealed to the Prime Minister and Finance Minister to give due consideration to the demands of traders that have forced them to go on strike. They said that instead of enforcing tax laws in one go, government should adopt a gradual approach to broaden the tax base. They said it was difficult for small traders to maintain accounts of their income and expenses and if they were registered in sales tax, it would enhance their cost of doing business. Traders in Lahore on Tuesday went on two-day strike by closing down businesses on the call given by All Pakistan Anjuman-e-Tajiran to protest new tax policy. All major markets, shops, and business centers will also remain closed in the metropolis on Wednesday (today).

A complete shutter down strike was observed in Lahore as all major and leading markets and shopping centres including Liberty Market, Akbari Mandi, Brandreth Road, Paper Market, Azam Cloth Market, Shah Alam Market, Abid Market, and Moon Market remained closed throughout the day. Shops were also seen closed on the leading roads including main Ferozpur Road, Mall Road, Main Boulevard Gulberg, Jail Road, Wahdat Road, Multan Road and GT Road. Trade leaders claimed the complete shutter down should be an eye-opener for the rulers who are multiplying the miseries of the people instead of creating a friendly business environment. All Pakistan Anjuman-e-Tajiran’s Central General Secretary Naeem Mir while addressing a press conference in Lahore said the imposition of unjustified 17 percent sales tax and CNIC-based invoicing system had made it impossible for them to run the businesses.

Mir further said the present government is creating difficulties for the business community and the FBR should review its policies “otherwise the strike could go beyond two days.” He urged Prime Minister Imran Khan to play his role to solve their problems. Trade leader of Shah Alam Market Waqas Munir said the law of jungle exists in the country where all government departments including the FBR are robbing the traders and businessmen. “No government can blackmail us since all traders are on the same page,” he said. “The condition of presenting CNICs does not exist anywhere in the world. And withholding tax is also not collected anywhere in the world,” he said and urged the traders to stay united.

President Grinding Mills Association Iftikhar Bashir said the harsh IMF conditions accepted by this government have almost destroyed all businesses. “The government must accept the demands of the business community to revive economic activities in the country,” he said. “This issue must be solved at the earliest because the country would suffer more losses if the strike is extended further.” Earlier, the Lahore Chamber of Commerce and Industry (LCCI) had rejected the two-day strike call given by All Pakistan Anjuman-e-Tajiran. However, they decided to support the strike after facing criticism from within the community. On Monday, the Islamabad, Rawalpindi, Lahore, Faisalabad and Karachi Chambers of Commerce and Industry announced full support to the countrywide shutter-down strike.