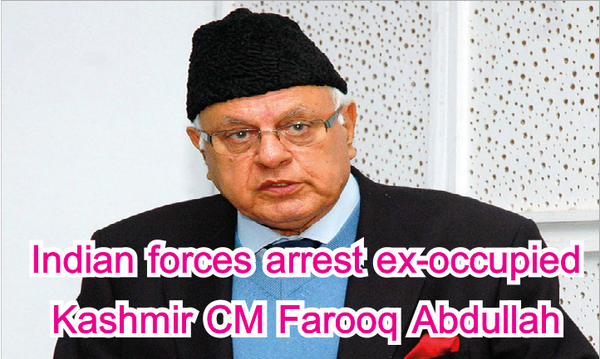 “We have arrested him, and a committee will decide how long the arrest will be,” said a top police official. Abdullah is the first pro-India politician who has been arrested under the Public Safety Act, under which rights activists say more than 20,000 Kashmiris have been detained in the last two decades.

Amnesty International has called the PSA a “lawless law,” and rights groups say India has used the law to stifle dissent and circumvent the criminal justice system, undermining accountability, transparency, and respect for human rights. Abdullah’s residence was declared a subsidiary jail and he was put under house arrest on Aug. 5 when Indian Prime Minister Narendra Modi’s Hindu nationalist-led government in New Delhi stripped Jammu and Kashmir of semi-autonomy and statehood, creating two federal territories.

Thousands of additional Indian troops were sent to the Kashmir Valley, already one of the world’s most militarized regions. Telephone communications, cellphone coverage, broadband internet and cable TV services were cut for the valley’s 7 million people, although some communications have been gradually restored. Earlier, the All India Majlis-e-Ittehad-ul-Muslimeen (AIMIM) chief Asaduddin Owaisi questioned the claims of Indian government over return of normalcy in the occupied Kashmir after Indian Supreme Court allowed Congress leader former chief minister Ghulam Nabi Azad to visit the valley.

According to an Indian news agency, Owaisi asked, “Why politics is not allowed in occupied Kashmir if the situation is normal?” He continued asking, “Why does a former CM of the valley need to seek permission from Indian SC to travel to Kashmir?” He asserted that it shows there is no normalcy in Kashmir. Ghulam Azad has also expressed earlier that New Delhi’s move to abrogate Article 370 is unconstitutional. Indian SC allowed Congress leader to visit Kashmir but denied them of holding any political rally. Owaisi was turned away twice from Srinagar and once from Jammu in August amid a security lockdown.