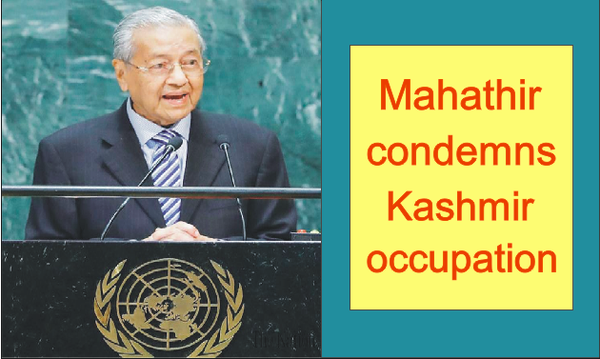 NEW YORK/WASHINGTON - Malaysian Prime Minister Mahathir bin Mohamad has called for settling the Kashmir dispute between India and Pakistan through “peaceful means”. In his address to the 193-member United Nations General Assembly on Friday, he regretted that despite the UN resolutions on Jammu and Kashmir, it has been invaded and occupied. “It might have some reason, but it is still wrong,” he said, adding, “The problem must be solved through peaceful means.” “Ignoring the UN would lead to other forms of disregard for the UN and the rule of law,” said Mahathir. On the lingering question of Palestine, the Malaysian prime minister said the first action of the United Nations was the creation of the State of Israel, seizing Arab land and expelling 90 percent of the Arab population. The result was terrorism when there was none before, or not on the present scale, he said.

Mahathir acknowledged that Malaysia accepts Israel as a fait accompli but cannot accept Jewish settlements or occupation of Jerusalem. Muslims, he said, are accused of terror even if they did nothing, their states are destabilized by regime change. The prime minister said there were no massive migrations in the past, but now wars and regime change force people to flee their countries. Noting that democracy is not the easiest form of government to operate, especially when it is adopted overnight, he called for time for gradual change. Otherwise, the result is violence, civil wars or new more harsh regimes. Turning to the plight of the Rohingya people in Myanmar, he noted many colonies in the West had expelled natives from their countries, but never as brutally as was done in Myanmar. The Rohingya dare not return to Myanmar because they could not trust its military, and also because of the helplessness of the world in stopping atrocities.

US lawmakers on Kashmir

Indian-American lawmaker Pramila Jayapal along with 13 other Members of US Congress has urged Indian Prime Minister Narendra Modi to address concerns over the human rights situation in occupied Kashmir and lift the communications blackout in the territory. A statement addressed to the Indian prime minister was issued jointly by the US lawmakers, Gilbert R Cisneros, Jr Judy Chu, Pramila Jayapal, Carolyn Maloney, Gerald Connolly, Ilhan Omar, Barbara Lee, Al Green, Zoe Lofgren, Andy Levin, Mike Levin, James P McGovern, Jan Schakowsky and Katie Porter. “On behalf of thousands of families across the country, who have been unable to contact family in Kashmir, we are urging the Indian Prime Minister to lift the communications blackout and address the ongoing humanitarian concerns,” the lawmakers said in the joint statement. “India is an important US partner and the world’s largest democracy. As such, we hope that the Government of India will demonstrate leadership and lift these restrictions. The people of Kashmir deserve the same rights as any other citizen,” it said. The joint statement, the lawmakers said, is in response to the imposition of media blackout that started on August 5 and has left millions in Kashmir without access to mobile phones or the internet while many others have been detained. “As a result, family members in the United States and elsewhere have had no ability to contact loved ones in Kashmir, leading to concerns about their welfare,” said the statement.