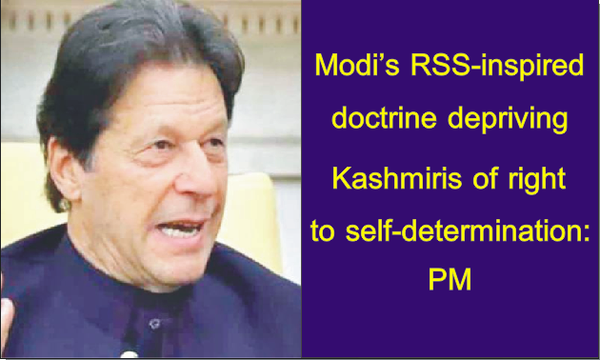 ISLAMABAD - Prime Minister Imran Khan on Sunday that Modi’s RSS-inspired doctrine on Occupied Kashmir is clear on depriving Kashmiris of their right to self-determination, imposing inhuman lockdown in the held territory and dubbing the Kashmiris’ struggle as terrorism.

In a series of tweets, he said as a first step India is depriving Kashmiris of their right of self-determination by illegal annexation of occupied territory. Second, the Prime Minister said, it is treating them as less than human by a three-pronged approach including trying to crush them with brute force by using inhumane weapons like pellet guns against women and children; imposing an inhumane lockdown depriving Kashmiris of basic necessities from food to medicines; and by mass arrests of Kashmiris especially youth and isolating Occupied Kashmir from the world by cutting off all communication links.

The Prime Minister further said that as third step, India is trying to show Kashmiris’ right to struggle for self-determination guaranteed in UNSC resolutions as terrorism being abetted by Pakistan. The aim is to create opportunity for a false flag operation against Pakistan while detracting world attention away from Indian state terrorism in Occupied Kashmir.