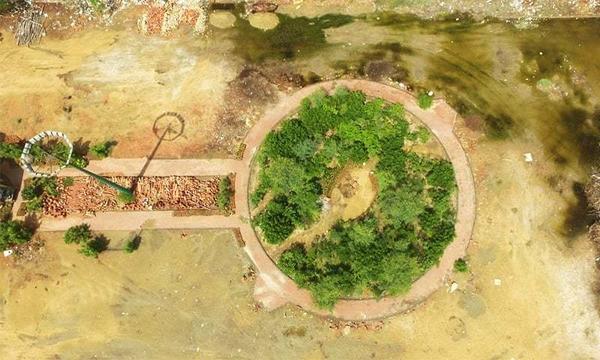 The Karachi Metropolitan Corporation (KMC), amid allegations of uprooting an urban forest in the Clifton area, took charge of the public space on Wednesday.

According to the KMC officials, the municipal authority took charge of the park, located in Clifton Block 5, and started the process of its cleanliness to be followed by plantation. The officials said that the park was handed over to urban forest chief Shahzad Qureshi for a period of five years but the contract has been suspended over violations of the agreement.

KMC Deputy Director Parks Shahid said that the urban forest will remain intact in the park and that more plants of Moringa are being installed. He added that the park would be open to the public after its renovation.

On the other hand, Qureshi alleged that the KMC had uprooted the plants of the forest. The KMC personnel had also disrupted the process of providing treated water through a wetland process, he added.

Qureshi said that at one hand, the KMC was holding talks with him, while on the other, the corporation sent its employees to the forest.

He said that the municipal body had handed over the forest to him for a period of five years. Under the project, he said, 50,000 trees had to be planted — out of which 15,000 trees have been planted so far.

"I don't know why the KMC took the park into its custody," he said, adding that with profound sorrow, he has to say that instead of being supported, he is being targeted by the KMC.

Meanwhile, Pakistan Tehreek-i-Insaf (PTI) leader Khurrum Sher Zaman announced that his party will donate 50,000 trees to the urban forest. He added that one million trees are being planted in Karachi.

Later in the day, Karachi Mayor Wasim Akhtar intervened in the matter and held a meeting with Qureshi and other concerned citizens.

“Today, Wasim Akhtar invited us to his office to hold talks after the recent decision of the parks department to cancel the adaptation of the land in Clifton to develop a park there,” Qureshi told Dawn.

He said that the talks were held in a positive atmosphere and he found them "encouraging". KMC Director General Parks Afaq Mirza also attended the meeting.

Qureshi quoted the mayor as saying that he wants the KMC to continue its endeavours to "complete the development of the park as per its design."

Akhtar also informed the concerned citizens that he would personally visit the urban forest, which is located near Karachi Grammar School in Clifton, and observe the work being carried out there, said Qureshi.

Providing some background on the adoption of the three-acre land to develop a park there, Qureshi said that around one-and-a-half year ago, an agreement was made with the KMC. Under the agreement, Qureshi said, he and other philanthropists planted some 6,000 trees. This year, they accelerated their efforts and so far, 15,000 trees have been planted.

He said that they had developed a park and a lake as well in the designated place. A system of treating water had also been installed. Furthermore, vegetables are also being sown there, which are being distributed among the deserving persons in the locality.

Qureshi expressed his hope that the KMC would withdraw its cancellation order and would allow them to complete the work.