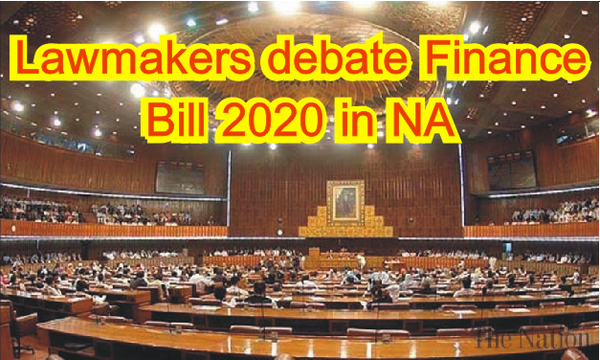 The government and opposition lawmakers on Monday continued their debate in the National Assembly on the federal budget and the Finance Bill 2020-21 before it is put to vote. Federal Minister for Industries and Production Hammad Azhar had presented a Rs7.14 trillion budget for fiscal 2020-21 on June 12. The government will likely face difficulty getting it passed as the opposition has built a united front against the budget. Apart from protesting the budget, opposition lawmakers have also decided to demand the prime minister’s resignation.

Federal Minister for Information Shibli Faraz had earlier said the federal budget will be approved today, adding that the PTI will put its ‘full force’ to ensure it. He had said that the opposition will get over its misconceptions about the budget in time. Earlier, senior opposition leaders from the PPP, PML-N and the JUI-F had described it as an "enemy of the people". Reacting to the budget, PML-N president Shehbaz Sharif had predicted that inflation and unemployment would surge as a result of it.

Erstwhile government ally Balochistan National Party-Mengal (BNP-M) leader Akhtar Mengal had also announced that his party was breaking its alliance with the ruling coalition, further depleting the government's numbers in getting the budget passed. PPP Chairman Bilawal Bhutto demanded the resignation of Prime Minister Imran Khan in his speech in the NA, saying that the premier should apologise for destroying the economy. While addressing the House, Bilawal said that the PM has two options; either he works alongside all the political parties and strive for the betterment of the country, or he resigns and goes home.