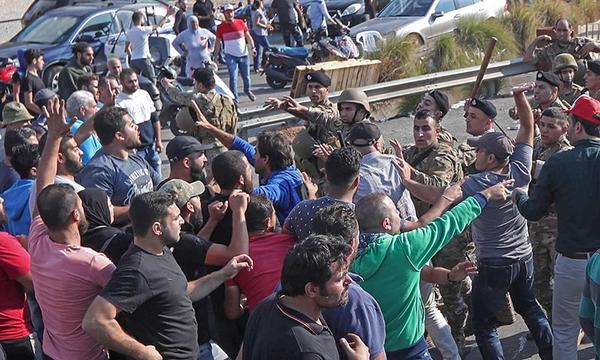 The Lebanese government's resignation under pressure from the street looked set to ease a two-week-old nationwide lockdown but protesters vowed on Wednesday to keep pushing for deeper change.

President Michel Aoun acknowledged Saad Hariri's resignation as prime minister on Tuesday but asked his government to stay on in a caretaker capacity until a new cabinet is formed.

But there was no clear way out of the political crisis that has drawn warnings from Lebanon's foreign partners.

On the ground, security forces reopened most roads that had remained mostly blocked by protesters since a proposed tax on calls via messaging apps sparked a wave of demonstrations on October 17.

The unprecedented mobilisation swelled into a popular drive to remove a political elite which has remained largely unchanged since the end of the civil war three decades ago.

Euphoric protesters experiencing a rare moment of national unity have pilloried politicians of all parties, calling for better public services, an end to rampant corruption and a complete overhaul of sectarian-based politics.

When a sombre Hariri appeared on television to announce his resignation, crowds erupted into celebrations across the country but warned that the government's fall was only one of their demands.

“The resignation is not enough to get us off the streets,” said Charbel, a 26-year-old draped in a Lebanese flag, who was still protesting in central Beirut on Wednesday.

“We need to keep up the pressure, but we should not keep the roads closed because now it's bothering even the people who were supporting the movement,” he said.

Hariri's resignation came after counter-demonstrators loyal to some of his political rivals attacked the main protest site in the capital's Martyr's Square.

They destroyed tents and marquees and the rest of the temporary infrastructure that turned downtown Beirut into a huge encampment — hosting protests and political meetings by day, concerts and parties by night.

Well-organised protesters, however, swiftly cleaned up and returned to the site, occupying the main flyover again on Tuesday evening.

Food stands serving sandwiches or corn on the cob were doing brisk business.

Some protesters laid out carpets and sofas, some slept in hammocks hung between traffic signals and others brought goal posts to set up a football pitch across the four-lane highway.

By Wednesday, having won the government's resignation, protesters were divided over the decision to remove roadblocks, which they see as one of the few sources of leverage for their leaderless and spontaneous movement.

As roads reopened, the education ministry called on schools and universities to resume classes on Thursday morning, and banks were set to open again the following day.

The resignation announced by Hariri came after the failure of days of consultations with his fractious cabinet to agree on a reshuffle and meet some of the protesters' demands for a technocratic government.

Early in the protests, Hariri had hinted that resigning was an option but his rivals in the government coalition, including Aoun's party and its allies from the powerful Shiite movement Hezbollah, had warned a political vacuum could lead to chaos.

Hariri's suggestions were rejected by Aoun, whose son-in-law Gebran Bassil is the outgoing foreign minister and one of the most reviled figures for the protesters.

Forming a government in Lebanon can typically take months, with every sectarian and party leader seeking to protect their own communal interests.

“There is no time for any of the old games,” Heiko Wimmen, Lebanon project director at the International Crisis Group think-tank, told AFP.

“The pressure of the street and, perhaps even more so, the fear of economic collapse will dictate an accelerated government formation,” he said.

The 49-year-old Hariri, who had already stepped down twice as prime minister in 10 years, could yet return as the head of the next government.

“Hariri throws it all away to better negotiate his return,” wrote the French-language newspaper L'Orient-Le Jour.

One rising name in the Sunni community to which the post is usually reserved is outgoing interior minister Raya al-Hassan, the first woman to hold that job and who has received praise for her bloodless handling of the protests.

Lebanon's economy, crippled by ballooning public debt, has been sliding to the brink of collapse in recent months.

Hariri announced a much-delayed reform package last week in a bid to address some of the protesters' demands and the requirements for a huge foreign assistance programme to be unlocked.

Some protesters want fresh elections to be organised, a move that would further delay the implementation of those reforms.