Punjab extends lockdown till May 9 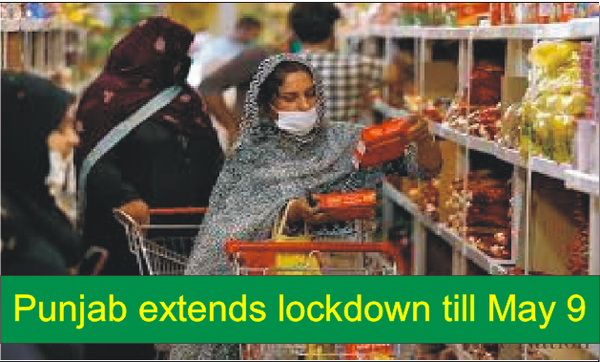 LAHORE  - In line with the decisions made in the NCC meeting, the Punjab government has extended the lockdown till May 9 to further stop the spread of COVID-19. In a statement issued on Friday, Chief Minister said that decision of extending the lockdown had been made with collective consultation. He said the decision had been made to extend lockdown in Punjab till May 9. Providing details, Usman Buzdar said that permission had been granted to open the milk and yoghurt shops, karyana stores, tandoors and bakeries during sehri timing from 2 am to 4 pm. However, collective sehri and iftaar feasts would be banned during Ramazan-ul-Mubarak, he added.

The CM said that agri. machinery workshops, spare-parts shops and vendors would be allowed working during fixed timings. He told that milk and yoghurt shops, poultry and chicken-meat shops would remain open from 9 am to 8 pm. He clarified that public transport would remain closed and markets, shopping malls, restaurants and government and private offices would also remain closed. However, medical stores and pharmacies would remain open, he said. He stressed that implementation on 20-point announcement for Masajid will be ensured and local level committees would monitor implementation on SOPs for Masajid. The citizens should take extra care in Ramazan-ul-Mubarak and comply with the governmental decisions is in their own interest, he concluded.