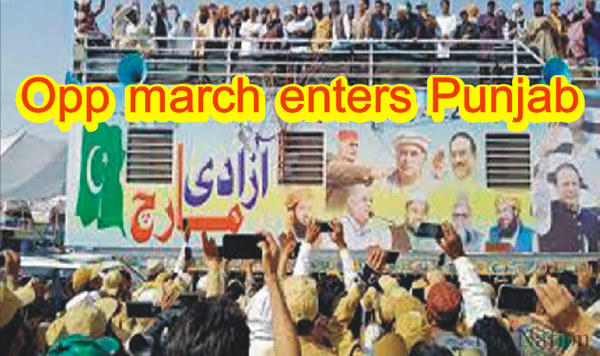 Lahore/Sukkur - Anti-government ‘Azadi March’ entered Punjab yesterday under the leadership of JUI-F chief Maulana Fazlur Rehman. The JUI-F-led rally had started from Karachi on Sunday and it made a stopover in Sukkur. Fazl, joined the caravan from Larkana as it resumed the journey to Islamabad on the second day on Monday. Earlier addressing the march participants in Sukur, the Ameer of Jamiat Ulema-e-Islam-Fazl said that they will not deter as the ‘war has begun’. Fazl further said that they are fighting a political war and there exists a danger to the country’s constitution. Referring to the march, he said that the purpose is to strengthen democracy in the country.

After addressing the rally participants in Karachi, the JUI-F chief spent the night in Larkana citing security threats. He join the rally from there as it headed to Multan. Thousands of people, including seminary students, are participating in the march. Convoys of political parties, including the Pakistan Peoples Party (PPP), the Pakistan Muslim League-Nawaz (PML-N), the Awami National Party (ANP) and others, have also joined the march. “The war has begun. Nothing can deter us,” says JUI-F chief The demonstrators holding their respective party flags chanted slogans against the government as they gained public attention all the way through Hyderabad, Hala Mutyari, Nawabshah and Khairpur on way to Sukkur. Following Fazl’s instructions, the march reportedly moved towards Pano Aqil and Ghotki to enter Punjab. The marchers reached Pano Aqil without paying any toll tax at Rohri Toll Plaza.

The motorway police dedicated one lane of the National Highway for the caravan as hundreds of more buses, cars and vehicles joined the march on Monday. Containers placed on the borderline between Punjab and Sindh had been removed for the marchers to proceed. Following the nearly inflexible negotiations with the government on Saturday night, the Azadi March began from Karachi where the JUI-F finalised arrangements to kick off the massive demonstration against the Pakistan Tehreek-e-Insaf (PTI) led government.On Monday, PPP representatives Saeed Ghani, Raza Rabbani, ANP leaders including Shahi Syed, PML-N senior leader Muhammad Zubair and many other politicians belonging to different political parties were present in the caravan of Fazl to express their support for Azadi March.

The PPP has expressed full support for the demonstration which was launched from Sindh – the province the party has been ruling since 2008. PML-N President Shehbaz Sharif held a telephonic conversation with Fazlur Rehman on Monday to discuss the next course of action. Shehbaz congratulated Fazl over successful conduct of March. The participants of Azadi March will make a stopover near Tarnol before entering Islamabad on October 31 (Thursday). The rally is expected to culminate in H-9 sector of the capital as the opposition side has given assurance to the government that they will not enter the Red Zone.

Earlier on Sunday, Fazl addressed the massive gathering of the protesters at Karachi’s Sohrab Goth and said that they won’t backtrack from their original demands, which include resignation of Prime Minister Imran Khan.

“We don’t accept the [general] elections held on July 25 and its results […] Imran Khan must resign,” he said. “The government has resorted to uncivilised tactics […] after Hafiz Hamdullah’s matter of citizenship, they have arrested [another party leader] Mufti Kifayatullah,” he said. Fazl lashed out at the ruling Pakistan Tehreek-e-Insaf (PTI) for what he claimed “compromise” on the Kashmir dispute.“The people of Karachi have responded to our call, I thank them for it […] I appreciate workers of all [opposition] political parties,” he said.