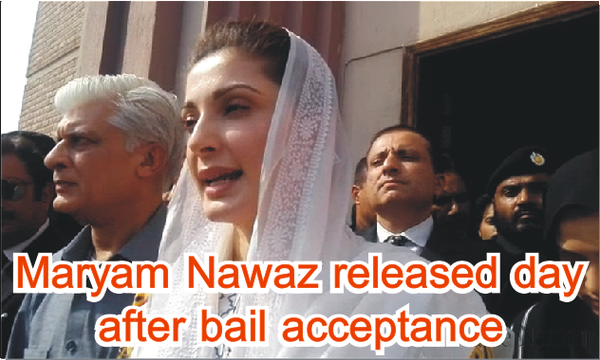 The Pakistan Muslim League-Nawaz (PMLN) leader Maryam Nawaz was released on Tuesday after her lawyers fulfilled the conditions set for the bail. Kot Lakpat Jail officials sent release orders a day after Nawaz's bail application had been accepted by the Lahore High Court (LHC). The orders were sent to Services Hospital, where Nawaz has been relocated to be with her ailing father, Nawaz Sharif. To satisfy the prosecution's apprehensions, the LHC asked Nawaz to submit her passport to satisfy “judicial conscience”. The court also asked her to submit two surety bonds of Rs10 million each and deposit Rs70 million with Deputy Registrar.

The court however, did not impose conditions that would have otherwise prevented Maryam Nawaz from participating in politics. As no conditions restrict Nawaz from speaking to media, leading rallies, or making speeches, it is likely that Nawaz will return to politics at the helm of the PMLN. Nawaz had been arrested for alleged involvement in the Chaudhary Sugar Mills case on August 8. She has since been jailed, along with her cousin Yousuf Abbas. Soon after the release orders were issued and signed, Nawaz Sharif was also discharged from the Services Hospital.