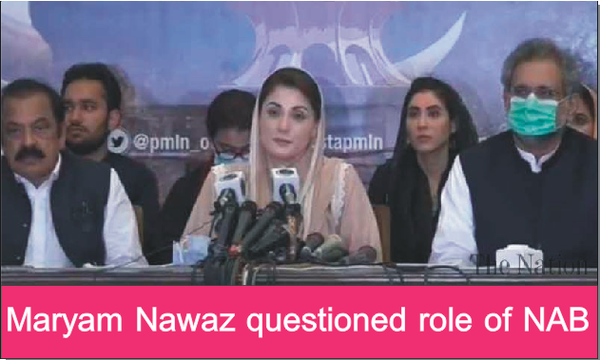 PML-N Vice-President Maryam Nawaz on Tuesday questioned the role of the accountability bureau after the apex court's judgement in the Paragon Housing Society corruption case and the recent Human Rights Watch report. She expressed these views while addressing a press conference in Lahore shortly after PML-N workers and police clashed outside NAB's office where she had arrived to record her statement in a case related to "illegal" acquisition of land in Raiwind. "They have to give answers. They have to give an answer as to why they used tax payers' money and money from the exchequer for political engineering” she stated.

She claimed that the reason behind summoning her once again was because the government was panicking. "It is my personal opinion that their internal surveys show that the PML-N's and Nawaz Sharif's popularity has risen. "They have become worried because of their internal surveys. They are panicking. Maryam began her press conference by thanking party workers and her security guards who stood by her, calling the latter unsung heroes. She added that the party would provide legal assistance to all those workers that had been arrested and detained in today's clash.