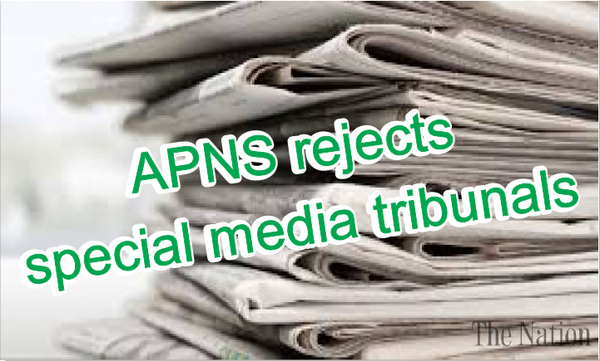 All Pakistan Newspapers Society (APNS) has unequivocally rejected the decision of the Federal Cabinet to form special media tribunals as announced by Dr. Firdous Ashiq Awan, Special Assistant to the Prime Minister. Hameed Haroon, President and Sarmad Ali, Secretary General of the APNS have stated that the formation of special media tribunals without consultation with the stakeholders in media is a ‘black’ day for the Pakistan press. The decision is in complete violation of Article 19 of the Constitution of Pakistan. Special courts aimed at intimidating and strangulating the media and freedom of expression are not only unconstitutional but also contrary to the spirit of democracy as envisaged in Prime Minister Imran Khan’s New Pakistan – or indeed in any democracy. The APNS calls upon the Federal Cabinet to review its decision. We also appeal to all media professional bodies and organizations within the press, both print and electronic, to support a call for urging the Prime Minister to intervene and facilitate a serious review of the Federal Cabinet’s decision. We also announce our intent to approach the highest judicial and legislative forums to oppose this extra-constitutional measure through all means in consonance with the law of the land.