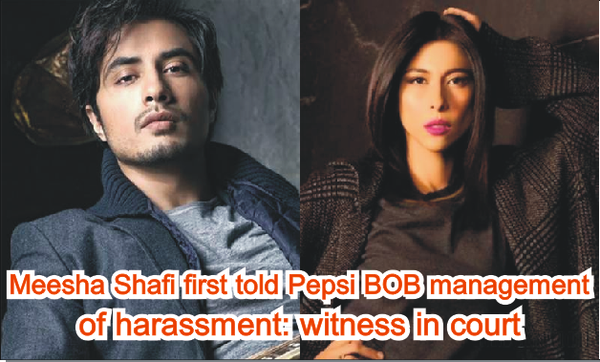 Meesha Shafi's personal manager Farhan Ali recorded his statement before a court in a defamation case filed by Ali Zafar against Shafi on Wednesday. Contrary to some media reports, his testimony indicates Shafi did alert him and the management behind Pepsi's Battle of the Bands of Zafar's harassment, in which both Shafi and Zafar were slated to work as panelists for the show's second season. Syed Farhan Ali has been managing Shafi's career on a project-to-project basis for the past four years. While Ali did say he did not personally witness any act of harassment, he was present at the time Shafi first voiced her concerns about Zafar's character. Ali, a musician himself, said: "I was not focusing on the plaintiff or the defendant. I did go out of the room a couple of times so cannot confirm whether or not any harassment happened." After the end of the session, Shafi told Ali that Zafar made her uncomfortable and "was not a good person" - even that she hated him, and made it clear she was unwilling to work with him any further.

The management of the Pepsi Battle of the Bands later replaced former panelist Atif Aslam with Ali Zafar for the show's second season. Ali shared that Meesha Shafi was unwilling to work with Zafar when she first discovered that Pepsi had replaced Aslam with Ali Zafar as a judge for the show. To this effect, Ali shared with the court that Meesha Shafi told Pepsi's team that she would not work with Zafar under any circumstances, and in fact, told them that she had been sexually harassed by the singer. This marks the first formal accusation Shafi made against Zafar, before she shared her experience with the singer on Twitter. Pepsi's team attempted to assure her that they would do their best for Shafi to maintain distance from Zafar, but she was not satisfied. In the court testimony, Farhan Ali said the Pepsi team did not feel that it could invalidate Zafar's contract just based on Shafi's accusation against him. These circumstances forced Shafi to go public with her accusation of harassment: "As a result, Meesha was forced to go public with her sexual harassment allegations despite my advice against it. I told her people would abuse her and she would lose her work too."

However, Ali also shared with the court that he had heard about allegations from other women as well regarding Ali Zafar, saying that one of his victims had confided in him. He however, could not share any details of the incident, as the victim in this case was his friend and was unwilling to go public with what had happened.  Ali also rubbished claims that Shafi had been receiving foreign funding to launch a #MeToo movement in Pakistan. "She sends her tax returns through me, and they have decreased," he said.  In April 2018, Shafi accused Ali Zafar of sexual harassment through a tweet, saying that she had been harassed "on more than one occasion". Since then, Zafar has filed a defamation case against Shafi, while Shafi recently filed her own defamation suit against Zafar.  Shafi's case has highlighted the lack of legal protections against women who are sexually harassed. Current laws have been exclusively interpreted to relate to the protection of women in formal employment situations. This means if a woman is sexually harassed in Pakistan, she has no real legal recourse to resort to for protection or penalty.