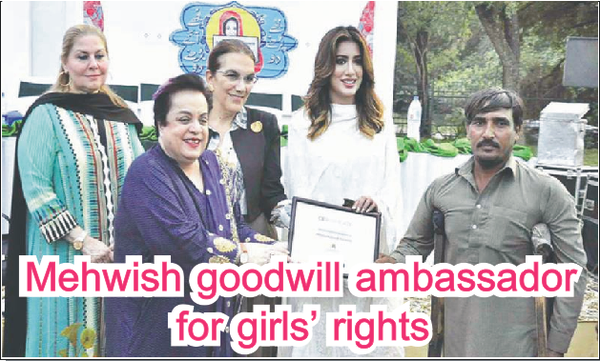 KARACHI- Another feather to Pakistan’s leading actress Mehwish Hayat’s cap as she has been appointed a goodwill ambassador for girls’ rights by the Ministry of Human Rights.The recipient of the prestigious Tamgha-e-Imtiaz, Hayat, announced about her appointment in a video message on micro-blogging website, saying: “Delighted to be appointed by the Ministry of Human Rights as Goodwill Ambassador the rights of the girl child.”

The ‘Load Wedding’ star - who has been vocal about humanitarian issues, said: “This is something close to me & I look forward to actively raising awareness of the issues to be addressed. Let’s give girls the better future they deserve.” Having been filled with enthusiasm, Hayat said: “It is an honour for me to play a crucial role in helping girls get their rights. I wish to see a Pakistan where girls are given the opportunities to get education.” She also appealed to the nation to support her in mission to give girls the better future they deserve.

“Let’s give girls the better future they deserve,” she added. Her announcement comes on the day when International Day of the Girl Child was observed on October 11.In August, Hayat was awarded the Pride of Performance in Norway. Addressing the event, she had conveyed Pakistan’s message of peace. In March, the famed Pakistani actress received Tamgha-e-Imtiaz for her outstanding contributions to the world of entertainment. She was also appointed the Muslim charity Penny Appeal’s brand ambassador. Last month, the actress made it to the list of The Muslim Vibe’s top five Muslim women in the world.