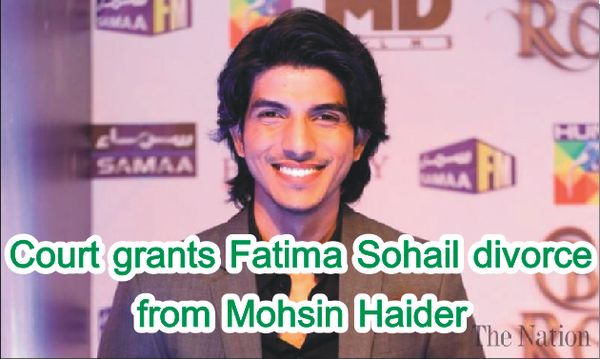 Actor Mohsin Abbas Haider and his wife Fatima Sohail officially ended their marriage on Thursday after a Lahore family court approved Sohail’s request for khula. Sohail had filed for khula at Lahore’s family court on September 3. She accused Haider of torturing and assaulting her. She also told the court that her husband had an extramarital affair because of which she could continue to live with him.

A separate case against Mohsin Haider found him guilty of threatening his wife, with a Lahore sessions court announcing the verdict in a domestic violence and fraud case on August 28. Sohail had accused Haider of beating her and cheating on her in a Facebook post on July 21. She then filed a case against him for threatening to kill her and siphoning Rs5 million from her father. She had claimed that Haider had assaulted her when she asked him to pay her back. She said that Haider had been beating, abusing, and assaulting her since they tied the knot in 2015.

Although Sohail has been successful in ending her marriage, and proving that Haider was in fact threatening her, the celebrity Haider has not been sentenced for the crime of physical and sexual abuse. In the province of Punjab, both physical and sexual violence against women -- even if they happen between married couples -- are crimes that have jail sentences. It is unclear why the state has chosen not to convict Haider of these crimes, or if he has been exonerated of these charges.