Nine emergency camps set up to drain out rainwater during monsoon 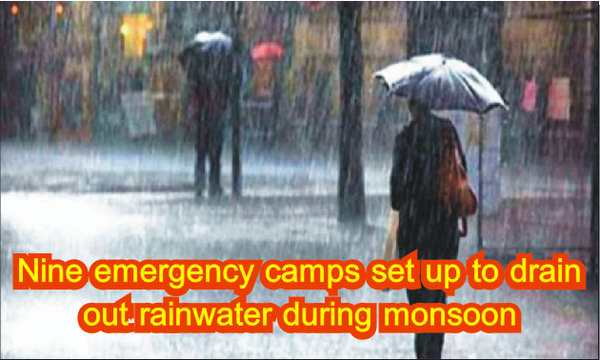 Faisalabad - The Water and Sanitation Agency (WASA) has established nine Monsoon Emergency Camps at different localities to cope with the situation in the event of heavy rains during the monsoon season. This was informed during a meeting held here on Saturday under the chairmanship of Faisalabad Development Authority (FDA) Director General (DG) Muhammad Suhail Khawaja to review the WASA’s monsoon plan and other arrangements. WASA Managing Director (MD) Jabbar Anwar and other officers were present at the meeting.

While giving briefing, the WASA MD informed that duties of the staff at monsoon emergency camps had been reduced to black and white. “Besides that, all necessary machinery has been arranged for the disposal of rainwater from low lying areas,” he told. He informed that these emergency camps had been set up at main Susan Road Madina Town, LMC School Summandri Road , Mandi Morr Allama Iqbal Colony, Bohr Wala Ground Raja Ghulam Rasul Nagar, Sheikhupura Road near Total petrol pump, Gulshan Colony Narr Wala Road, Jhang Road near Rescue 1122 station, Kalmay Wali Tanki, Gulistan Colony and Ahmad Nagar (drainage division).

It was informed that the staff would perform duties round the clock during the monsoon season in three shifts. The monsoon emergency camps would be placed under the supervision of WASA sub-engineers, who will react immediately in case of any emergency due to the accumulation of rainwater. FDA Director General Muhammad Suhail Khawaja directed the WASA officers to ensure successful implementation of the monsoon plan, and said that all possible resources and professional capabilities should be mobilized to drain out the rainwater from the low lying areas without any delay for the immediate relief of the citizens.

He emphasised the quality cleanliness of sewerage system and storm drains for ensuring the sufficient capacity of flow of rainwater. He said that executing the monsoon plan should be taken as serious challenge by the WASA and best strategy should be devised to raise the performance of WASA services. He directed that all machinery, including generators, should be made operational.