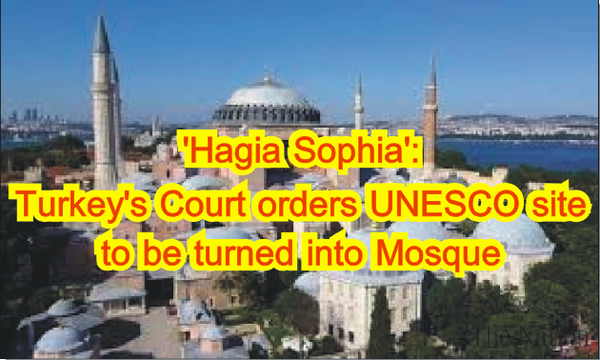 Turkey's Court on Friday has given ruling on whether the UNESCO World Heritage site, Hagia Sophia, in Istanbul on Friday as UNESCO World Heritage site would remain a museum or be turned into a mosque, overturning a 1934 decision. Its 'possible' conversion into a mosque has been opposed by UNESCO, the EU, the US and Christians around the world, with Ecumenical Patriarch Bartholomew warning that the move "would turn them against Islam".

The Church of the Holy Wisdom was completed in 537 AD during the reign of Byzantine Emperor Justinian the Great, and remained the main cathedral of the Orthodox Church until the conquest of Constantinople by the crusaders in 1204, after which the building was briefly turned into a Catholic cathedral.

In 1261, the Byzantines recaptured the city and the Church of the Holy Wisdom once again became the main Orthodox cathedral. Nearly two centuries later, in 1453, the city was conquered by the Ottoman Empire and turned into a mosque. It remained a mosque until 1931 when it was closed to the public for four years. It was re-opened in 1935 as a museum by the Republic of Turkey.