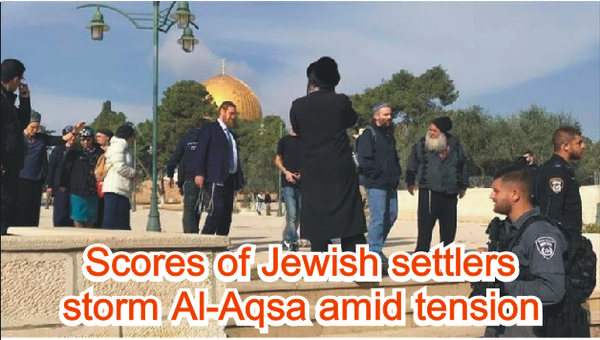 Scores of Jewish settlers forced their way into Jerusalem's flashpoint Al-Aqsa Mosque compound on Monday, according to a Palestinian agency.  "Around 122 settlers backed by Israeli police stormed the Al-Aqsa compound since early morning," the Religious Endowments Authority, a Jordan-run agency responsible for overseeing the city's Muslim and Christian holy sites, said. The incursions have caused frictions between Muslim worshippers and Israeli forces near the flashpoint compound.

According to the authority, Israeli police detained four worshippers inside the site, without specifying the reason for the arrests. For Muslims, Al-Aqsa represents the world's third holiest site. Jews, for their part, refer to the area as the "Temple Mount," claiming it was the site of two Jewish temples in ancient times. Israel occupied East Jerusalem -- in which the Al-Aqsa is located -- during the 1967 Middle East War. It formally annexed the entire city in 1980, claiming it as its capital -- a move never recognized by the international community.