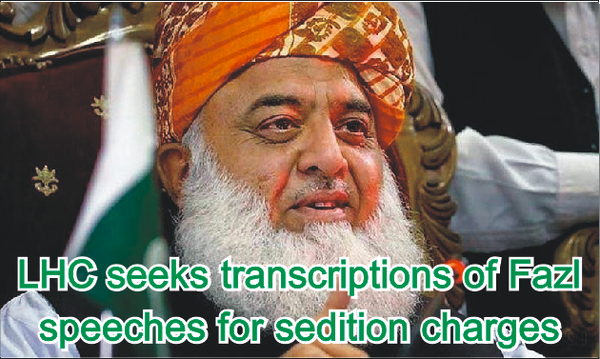 The Lahore High Court whilst hearing arguments in a sedition petition filed against Maulana Fazlur Rehman, leader of Jamiat-e-Ulema Islam (JUI-F) today, sought tangible proofs. The court demanded a transcript of all the speeches deemed seditious by the filer of the petition to be presented as evidence in the court of law. A formal investigation in the matter would then be kicked off if the evidence is deemed satisfactory. A civilian who took the matter to court against the political and religious leader claimed that the religious cleric had made speeches against the state and had incited seditious action against it.

Calling the Maulana's speeches firebrand, and capable of plunging the country into anarchy. Armed militias were being prepared by the JUI-F, claimed the petitioner, and peace and harmony were about to be disrupted under the grab of the Azadi March. The petition demands a formal sedition inquiry against the opposition leader and also seeks a complete ban on his speeches and media appearances. Addressing a press conference in Sukkur yesterday (Thursday), Maulana Fazlur Rehman said that JUI-F will hold gathering in Karachi on October 27 which he is set to attend. “JUI-F will start Azadi March from Karachi and will enter into federal capital on October 31 (Thursday), said Maulana Fazlur Rehman.