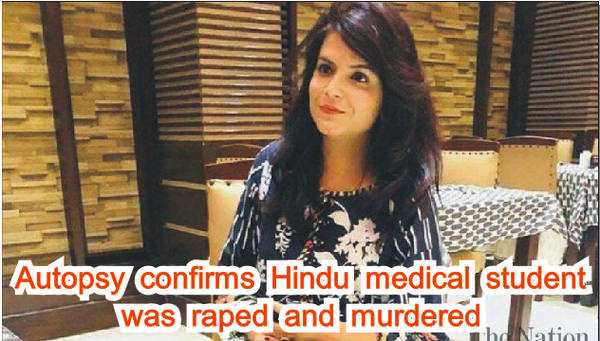 On Wednesday night, the autopsy report of Nimrita Kumari, issued by the Chandka Medical College Hospital, finally revealed that Nimrita Kumari was raped before she was murdered. Last month, Kumari's death under suspicious circumstances inside her university hostel led to protests and demonstrations against the university administration of her college, the Bibi Aseefa Dental College. The university administration, including the Vice-Chancellor of the Larkana Shaheed Mohtarma Benazir Bhutto Medical University, categorically claimed that Kumari committed suicide.

However, Kumari's family, and especially her brother, a medical professional in Karachi, suspected that Kumari had been killed, and accused the administration of trying to suppress reports of a violent incident. The autopsy report confirms these suspicions, saying that Nimrita died of asphyxiation, meaning she was choked to death.

The report says: "The ligature marks also tally with the information. Such signs are produced either in strangulation or hanging and are to be ascertained through circumstantial evidence as corroborative at the crime scene by state investigation authorities."Tests confirmed the presence of semen and the fact of a forced sexual act. Nimrita Kumari Chandani was a final year student at Bibi Aseefa Dental College. She was found dead in her hostel room under suspicious circumstances on September 16, 2019. After province-wide protests, a judicial inquiry was launched into the case. What has become a murder probe is currently underway by the Larkana District & Sessions Judge, on the directives of the Sindh High Court.