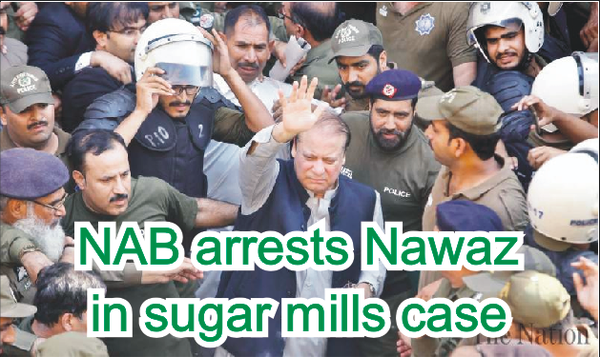 LAHORE    -   Former prime minister Nawaz Sharif on Friday categorically announced his party’s full support to the anti-government protest march, called by JUI-F chief Maulana Fazlur Rehman as NAB arrested him in Chaudhry Sugar Mills case. This clear-cut statement of the top PML-N leader comes amid growing rumours regarding differences among his party workers over supporting the protest. Early this month, Maulana Fazl announced countrywide protest movement to kick out the rulers. Several opposition parties including PPP and ANP have also announced their support to the protest march.

“We appreciate the spirit of Maulana Sahib and we fully support his (protest) march,” Nawaz said while talking to reporters outside an accountability court Friday. “We think that our point of view and the viewpoint of Maulana are the same. Therefore, we fully support (him).” Early Friday a NAB team arrested the three-time PM from Lahore’s Kot Lakhpat Jail in another case related to Chaudhry Sugar Mills and immediately produced him before the court. Judge Ameer Muhammad Khan handed over the accused to the NAB on 14-day physical remand. The PML-N leader would be produced before the court again on October 25.

Nawaz’s son-in-law Captain Muhammad Safdar and dozens of lawyers and party workers gathered outside the court where the ex-PM was brought by police under tight security arrangements. A few chairs and the main gate got damaged due to the rush of workers as they tried to force their entry into the court. Safdar accompanied Nawaz Sharif as he reached the court. When Nawaz appeared from the court after a brief hearing, reporters and TV crews rushed towards him. Some on-duty policemen tried to keep journalists at bay but Nawaz stopped and started media talk. He said Maulana’s advice of resigning from the parliament soon after the last year’s general elections was a right advice.

“But, we convinced him (not to do so). But, I understand that he had a valid point,” Nawaz said. “We made a mistake in the past by not accepting Maulana’s advice. And, it will be another mistake if the demand of Maulana is not endorsed today.” Nawaz termed the anti-government protest as justified and said Maulana is protesting for the right thing. He said his party fully supports the protest march and the sit-in.

Earlier, during the court hearing NAB’s prosecutor argued that Nawaz was the largest shareholder in the Chaudhry Sugar Mills in 2016 and he also had shares in the Shamim Sugar Mills. The NAB lawyer also claimed that funds were transferred into the accounts of Chaudhry Sugar Mills from abroad and, in 1992, a foreign company provided Rs15.5 million to Nawaz. However, it is not clear yet who owned this company. Nawaz’s lawyer Amjad Pervaiz Butt argued that Nawaz had nothing to do with the Chaudhry Sugar Mills because neither he was a director nor the shareholder. He said it was not the first time that assets of his client were being investigated by his opponents.

Pervaiz reiterated that Nawaz never headed or sponsored any company in 1991. But in fact, the other members of Sharif family were the directors and shareholders in this company. He also argued that a joint investigation team constituted on the directives of the Supreme Court had already investigated all such allegations after which the NAB had prepared a reference. Therefore, there is no justification of yet another investigation, he said. The lawyer also objected to the NAB’s demand of physical remand of his client stating that the NAB’s case was based on malafide intentions. The lawyer also appealed to the court to quash the case.

Nawaz during the hearing complained that he was not allowed to meet his lawyer. He straightforwardly rejected all the allegations stating that NAB was already investigating all declared assets. He said the allegations levelled against him were totally baseless. Referring to the arrest of PML-N leader Rana Sanaullah, the ex-PM said that some people are being implicated and arrested in narcotics cases. “What is this? If they think that we would bow before them. It will never happen,” he said. The Islamabad Accountability Court handed seven years in prison to former PM Nawaz Sharif on corruption charges on December 24th.